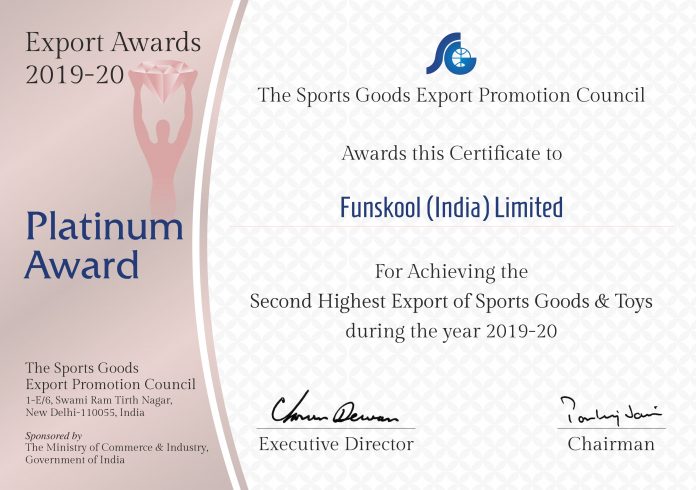 Mumbai, 21st January 2021: Funskool India Ltd. has been awarded the Platinum Award for outstanding performance in export of Sports Goods & Toys by the Sports Goods Export Promotion Council (SGEPC).  The Indian toy manufacturer, promoted by MRF group, has been recognized for achieving the second highest export of sport goods and toys during the year 2019-20. SGEPC have also confirmed that Funskool is the largest exporter of toys from India in 2019-20.

Commenting on the occasion, Mr. R. Jeswant, CEO Funskool India, said: “We are extremely happy to have received this recognition. Our own brands have made an impact in several overseas markets and we have emerged as a reliable manufacturing partner for several international toy companies. The toy industry has a lot of potential in India and we are very optimistic about the future.” Mr. Shabir, General Manager-International Division, Funskool India, said “Winning the award for being the “Highest Exporter for Toys from India” and the “Second Highest Exporter in the Sports Goods and Toys Sector” is a great recognition for us at Funskool. We share our Prime Minister’s vision of making India a hub for manufacturing high quality toys. Funskool shall lead the way in getting toys designed and made in India exported to every major country in the world.”

Mr. Tarun Dewan, Executive Director, The Sports Goods Export Promotion Council, said “We congratulate Funskool for achieving highest export of Toys from India, consistently for last three years. Funskool has not only achieved the highest export of Toys from India, but also registered an exponential growth in export in last few years, thus contributing to the mission of Hon’ble Prime Minister of India “TEAM UP FOR TOYS”. The quality toys, made in India, by Funskool have replaced many imported toys in the Indian market and also exported to various countries worldwide. We wish Funskool more success and glory in the coming years.”

The Export Awards 2019-20, organized by Sports Goods Export Promotion Council is sponsored by Ministry of Commerce and Industry, Government of India. Funskool India, in the past, has also received the Gold Award in 2018-19 and 2017-18 in the same category by SGEPC. It is also the first Indian Toy manufacturer to receive the BIS certification for Safety of electric toys – IS 15644 for the manufacturing plant based at Goa, which also has the license of IS 9873-Part 1 which covers non-electric toys.

Sports Goods Export Promotion Council (SGEPC) is an apex industry forum and a common platform for companies from all over the country, with common interests, to meet and exchange views, decide on common strategies for promotion and interact regarding where they can voice their concerns at both national and international levels.

SGEPC acts as a direct link between the Industry and the Indian Government whereby it provides feedback on industry’s requirements to the Indian Government and informs Government directives to the industry. SGEPC collects export data from its members, maintains a statistical record of exports of sports goods and toys and evaluates its performance on an annual basis. The council conducts Export Awards on an annual basis to recognizes the achievements of exporters and awards the top performers.