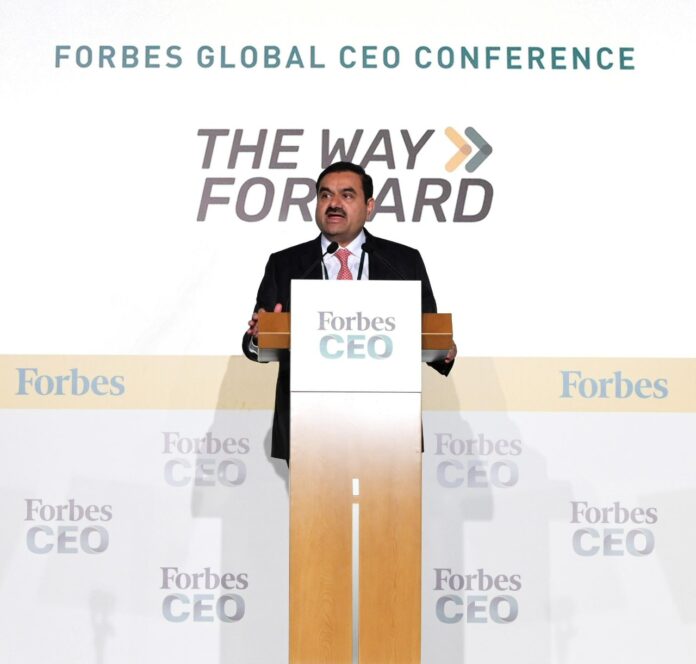 It is an honour to be here at the 20th Forbes Global CEO conference. I am glad to see this return to a physical meeting format after a gap of 3 years. Zooming in and out of virtual meetings, hanging out with Google, or teaming with Microsoft, made me feel like I was permanently in the cloud. I could not be happier to see we are back to where I can actually stand on earth between an audience and their lunch.

We all realize that the last few decades have been a time of remarkable economic growth for the world. In this context the conference theme “The Way Forward” is fascinating. Because the lenses through which – you and I – define “the way forward” may not be the same anymore. In my view, globalization is at an inflexion point. It will look very different from what we had come to accept in a largely unipolar world. Many of us – including I – bought into Thomas Friedman’s socio-economic business model that claimed, “The World Is Flat’. We had started believing that the digital revolution marked the “end of borders’”. We accepted that market deregulation and economic integration had set in motion a gravity-defying era of economic progress. This seemed to be a logical summary of borderless and limitless growth.

Who would have imagined that our world would change in just 36 months? The unprecedented complexity created by a parallel surge in demand – and – contraction in supply is leading to inflation levels unseen over the past forty years. Many federal banks are doing the unthinkable – raising interest rates so much that they can crash an economy into recession. This is the reality of today.

On top of all of this, a war that has implications well beyond its borders, accelerating climate change challenges, and uncertainty about future pandemics – together – means we are in unchartered waters. And the sails of this story are still unfolding. All of this is leading to a massive realignment of nation ecosystems. We have seen it with the ratification for adding new NATO members, the rolling out of the Abraham accord in West Asia, a ringfenced Central Asia wanting to have more control over their own destiny, and so on. We must recognize that we are now witnessing a new set of geopolitical couplings as we transition into a multipolar world. What I see ahead are the new principles of global engagement based on greater self-reliance, lowered supply chain risks, and stronger nationalism. Some have called this ‘the rising tide of deglobalization’.

Therefore, the question is – where does this leave India? In my view, the global turbulence has accelerated opportunities for India. It has made India one of the few relatively bright spots from a political, geostrategic, and market perspective. The term ‘relatively’ is important because Europe’s conditions have only gotten more difficult. The ongoing armed conflict has accelerated its structural weaknesses. Balancing the aspiration levels of the EU’s member countries and still keeping the EU united will be harder than ever before. The United Kingdom continues to slide as it struggles with Brexit and a new set of hard-to-optimize economic challenges.

Also, I anticipate that China – that was seen as the foremost champion of globalization – will feel increasingly isolated. Increasing Nationalism, Supply Chain Risk mitigation, and Technology restrictions will have an impact. China’s Belt and Road initiative was expected to be a demonstration of its global ambitions, but the resistance now makes it challenging. And its housing and credit risks are drawing comparisons with what happened to the Japanese economy during the ‘lost decade’ of the 1990s. While I expect all these economies will readjust over time – and bounce back – the friction to the bounce-back looks far harder this time.

Now, talking about India – I will be the first to admit that we are far from perfect. However, I will also claim that the essence of India’s democracy lies in its imperfection. What many see as India’s imperfections reflects a thriving and a noisy democracy. Only the free can afford to make noise – to have their imperfections visible. To over-manage this would be to destroy India’s unique ability to express its diversity. The fact is India has just become the world’s fifth largest economy. The fact is India is on the path to be the world’s third largest economy by 2030. The fact is India’s real growth is just starting – as it goes from its 75th year of freedom this year – towards its 100th year of independence. Our country calls this period – Amrit Kaal. Meaning the perfect period for beginning a better tomorrow.

Let’s double click some more on the trends. Following our independence, it took India almost 58 years to reach the 1-trillion-dollar GDP mark. It then took 12 years to achieve our 2nd trillion dollars – and thereafter, only 5 years to achieve the 3rd trillion dollars. This rate will further accelerate as the digital revolution kicks in and transforms every type of activity at a national scale. We are already witness to this. In 2021, India added a unicorn every 9 days, and it executed the largest number of real-time financial transactions globally – a staggering 48 billion. This was 3 times greater than China and 6 times greater than the US, Canada, France, and Germany combined.

India is now on the cusp of creating several thousands of entrepreneurs. While many will not make it to success – the sheer learnings and momentum of the youth – will mean that the pace of unicorn creation in India is set to accelerate. And for every unicorn that rises, we will see the birth of dozens of micro-unicorns. In fact, India is already the world’s hottest ground for new ideas. Of the 760 districts in India, over 670 have at least one registered start-up. A smart phone and inexpensive data – mixed with aspirations – make the most potent mix to transform a nation. And the digitally enabled India’s journey is just beginning.

While this journey of India’s growth to date has been driven largely by domestic investments, we recognize that an economy needs both domestic and foreign direct investment. Last year, India recorded its highest annual FDI inflow of 84 billion dollars. In this ongoing year, the inflow is expected to cross 100 billion dollars – thereby setting another record. In fact, India’s FDI inflows have increased over 20-fold since the year 2000. There could be no better sign of the increasing global confidence in India. I expect the flow of FDI into India to further accelerate and rise above 500 billion dollars over the next 15 years – making India by far the world’s fastest growing destination for FDI.

This confidence of a nation is also reflected in the scale of the decisions corporates make. This has been the case with the Adani Group as we benefit from a rising India. In this context, let me outline the primary areas that will define our strategic direction – both within India and then beyond India’s borders. At the top is Energy Transition – followed by Digital Transformation.

As a Group, we will invest over 100 billion dollars of capital in the next decade. We have earmarked 70% of this investment for the Energy Transition space. We are already the world’s largest solar player, and we intend to do far more. In this context, Adani New Industries is the manifestation of the bet we are making in the energy transition space. It is our commitment to invest 70 billion dollars in an integrated Hydrogen-based value chain.

Therefore, in addition to our existing 20 GW renewables portfolio, the new business will be augmented by another 45 GW of hybrid renewable power generation spread over 100,000 hectares – an area 1.4 times that of Singapore. This will lead to commercialization of three million metric tons of green hydrogen. This multi-fold business will see us build 3 giga factories in India. We are in the process of building a 10 GW silicon-based photo-voltaic value-chain that will be backward-integrated from raw silicon to solar panels, a 10 GW integrated wind-turbine manufacturing facility, and a 5 GW Hydrogen electrolyser factory. Today, we can confidently state that we have line of sight to first – become one of the least expensive producers of the green electron – and thereafter – the least expensive producer of green hydrogen. It is an absolute game changer for India and opens up the unprecedented possibility that India could one day become a net energy exporter.

However, while we undertake this uniquely ambitious energy transition journey, we are also making sure that our goals stay equitable with national needs. Critics would have us instantly get rid of all fossil fuel sources that India needs to serve its large population. This would not work for India. Even today, India with 16% of the world’s population accounts for less than 7% of CO2 emissions and this ratio continues to fall. Therefore, let me echo what Mr. Steve Forbes himself said just a few days ago. Quote – “Amazingly, no one did their homework to figure out what was involved in replacing fossil fuels with alternative energy sources. Nor did they factor in what would happen if the sun didn’t shine or the wind didn’t blow”. Unquote. No one could have said it any better.

Next, our ambitions in the space of Digital Transformation also seek to benefit from the energy transition adjacency. The Indian Data Center market is witnessing explosive growth. This sector consumes more energy than any other industry in the world and therefore our move to build green data centers is a game changing differentiator. We will interconnect these data centers through a series of terrestrial and globally linked undersea cables drawn at our ports and build consumer based super-apps that will bring the hundreds of millions of Adani’s B2C consumers on one common digital platform. Once done, the monetization possibilities are endless. We also just finished building the world’s largest sustainability cloud that already has a hundred of our solar and wind sites running on it – all off a single giant command and control center that will soon be augmented by a global A-I lab. These are just a few of the adjacencies that are being mainstreamed at our digital businesses at Adani.

While I have focused on Adani’s renewable and digital businesses, the Adani Group functions as a set of adjacent businesses that act like a giant network. This adjacency-based business model defines the crux of our strategic direction. Let me elaborate.

The point I would like to make is that – India is full of incredible opportunities. The real India growth story is just starting. This is the best window for companies to embrace India’s economic resurgence and the incredible multi-decade tail wind the world’s largest and most youthful democracy offers. India’s next three decades will be the most defining years for the impact it will have on the world.

Let me conclude by saying that my views come from being an incurable optimist. This optimism is the wind in my sails that has made us India’s most valued business. It is the fire that flames my belief in the India growth story. It is the blue in the sky that Indians believe to be the symbol of the limitless.

A democracy whose time has come cannot be stopped and India’s time has arrived. I sincerely believe this can only be good news for the global order – India as an economically successful democracy that leads by example.

What we do in the short term will look like a marathon. What we achieve in the long run will look like a sprint. Yes – the seas will be turbulent – but the optimist in me prefers the turbulence that raises us to greatness over the stillness that would lower us to mediocrity.

I invite you to bet on India and embrace India’s aspirations and potential.