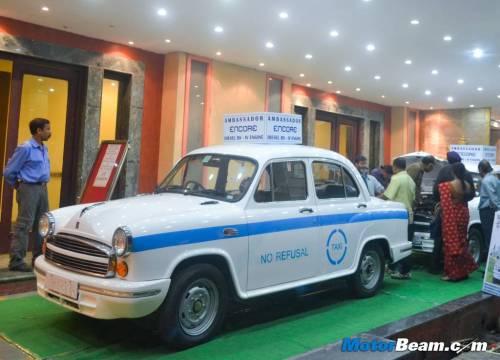 September 1, 2013: Hindustan Motors announced that their new BS 1V ambassador model Encore would cost under Rs 5 lakh in India. This diesel variant is expected to make in roads in the newly formed ‘non-refusal’ taxi segment. The initial demand for this models is expected to come in West Bangal, where government recently issued permit for 2000 taxis under ‘non-refusal’ scheme where drivers cannot refuse passengers.
The company sources stated that people can start booking for this model from 2nd September onwards. They have also made it clear that quality has not been compromised for price. HM plans to ramp up its manufacturing facility to meet thr expected demand for Encore model. This model will also give HM a re-entry to the major cities in India especially after BS III cars were banned. The company bet high on Encore model as they have invtested heavily in convering the BS III to BS IV standard and OBD2 level.