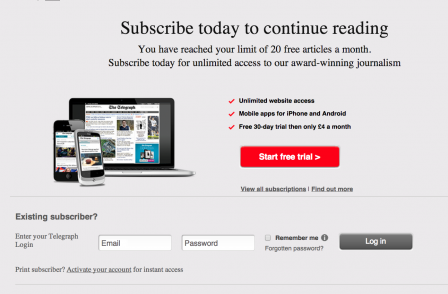 Indian newspapers are recently facing a hard time with a decline in their revenue amidst Covid-19. Even though a question exists on whether the readers are ready to pay for what they read, some dailies are getting into the paywall model to overcome the issue of the drop-in revenue. But still, new media have not put an end to the story of print media. According to the Indian Readership Survey, the largest circulated daily in India had managed to maintain a readership between seven crores and six crores over the last years. This is a strong example to prove that there is not a sharp fall in the usage of print media.

The Hindu, Business line, and Business standards are some of the main newspapers who first took the experiment step of introducing paywall while News Laundry introduced soft paywall (where some content will be free to read, however, users have to pay to read the main contents). It will be a very slow process especially in a country like India where newspapers are priced low and most TV channels are free to air. But to increase the sales of a paywall, companies with high circulations and large amounts of exclusive content can increase their demands on print subscriptions. So, people who value the newspaper will be ready to pay for the subscription and thus it will benefit in terms of revenue in the long run.

The previous week, the largest selling English daily Times of India adopted a paywall model for Rs.199 every month to the readers making them accessible to multiple editions of the paper. In this lockdown period, it is also possible that free accessible e-paper can be downloaded, altered, and redistributed as fake news by mischief-makers. According to Sivakumar Sundaram, Chairman of the Executive Committee of BCCL, whatever is free and forwarded on WhatsApp groups will not be valued and the paywall model is getting a good response. The Hindu group who were among the first to adopt this model is also happy with it. Pradeep Gaviola, the business head of The Hindu Group responds to this as Covid-19 had increased the consumption of news world over. And people also look for trustworthy sources of news, thus they will continue with this model.

Recently many newspapers like Frontline, Sports star, Young World Club, are behind this model. Lockdown period had helped them built their brand stronger in the minds of people.

Passionate In Marketing - July 5, 2020
0
Mathrubhumi.com, one of the largest media houses in India and MaxEd, an industry-academia connect platform are now associated to dawn a new venture of...

“We set a tripod on a towel and dragged it for...