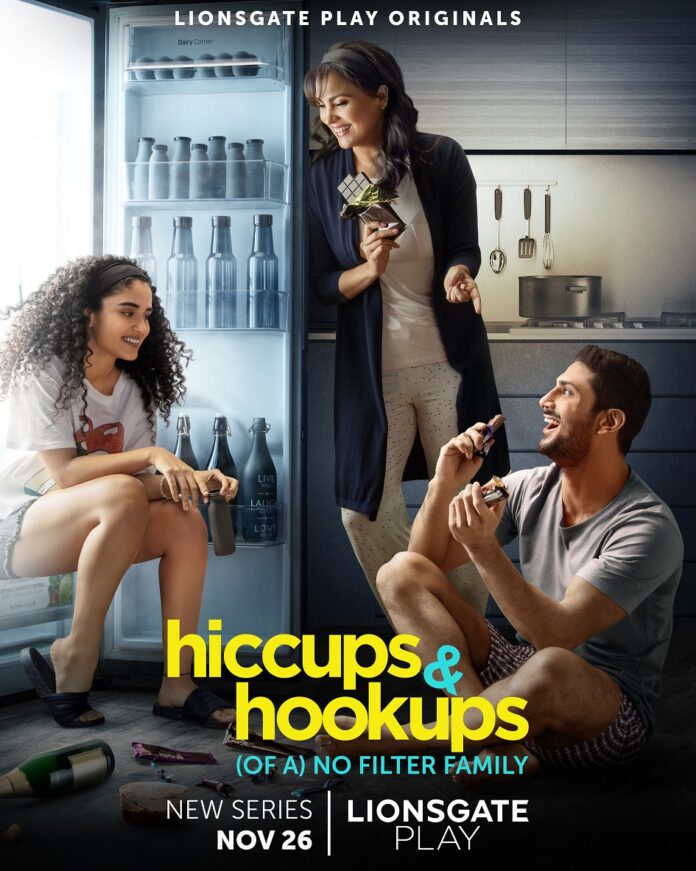 Mumbai, 25th November 2021: What is common between Rajkummar Rao, Alok Nath and Simi Taparia? No points for guessing unless you have been living under a rock! The famous Bollywood faces have been troubled by the soon to be launched #NoFilter family – The Rao’s. The Rao family starring versatile actors Lara Dutta, Pratik Babbar and Shinnova will be seen in Lionsgate Play’s first Indian original series Hiccups and Hookups. The upcoming show is helmed by talented director Kunal Kohli and will be premiered on Friday, 26th November 2021 across 8 countries- India, Malaysia, Indonesia, Sri Lanka, Bangladesh, Bhutan, Maldives, and Nepal. Known for its edgy and curated content, Lionsgate Play has left no stone unturned to promote its first original while breaking the stereotypes and recreating the art of storytelling.

All hell broke loose when Lara Dutta’s profile was seen on a dating site, that created a stir amongst the young millennials. With a plethora of quirky tweets and memes all over the internet, the brand’s first activation was an instant hit with the audience leading to Lara clarifying that it’s not her but the show’s protagonist, Vasudha who is looking for a match for herself. Further, the brand roped in ace actor Rajkummar Rao to introduce the new Raos with Welcome the Raos campaign. Rajkummar Rao introduced the host of characters from the show in one of the most innovative first look videos to have ever hit the airwaves.

This was followed by a hilarious video that saw association with Sima Taparia aka Sima aunty in an unfathomable challenge of finding prospective partners for the Rao family. The quintessential matchmaker was left hopeless when she was faced with cheeky secrets of the family. The icing on the cake was a video with veteran star, Alok Nath visiting the sets of the show as Babuji, the most sanskari character in Bollywood and his face off with the #NoFilter family that gave a peek into the sassy side of the Rao family.

Mr. Amit Dhanuka – Executive Vice President at Lionsgate commented, “We are ecstatic and thrilled with the buzz around our first Indian original production, Hiccups and Hookups. The show is exploring the young adult space which a niche genre. We are confident the show will win hearts and open dialogues that are otherwise considered taboo. All marketing assets have done exceptionally well and have created a lot of interest and curiosity amongst the viewers. With the multi-layer innovative marketing campaigns, we hope to turn the leaf of marketing to a newer page.”

Ahead of the launch, the platform has been creating edgy content to engage with their multigeneration audience especially millennials and Gen Z. Through appealing campaigns, the brand has been able to portray and resonate the vibe the brand stands for. Both digital and offline activations have played a massive role in creating awareness around the show. The original also witnessed some dramatic posters that was largely appreciated by the audience. The posters established the uncomplicated transparent relationship between the lead characters followed by the ensemble poster that reflected the young and peppy vibe of the show.

With its globally curated library, ease-of-use and irreverent and edgy content, Lionsgate Play has been able to evolve right alongside Millennials. Lionsgate Play app is available to download across a broad array of platforms and devices in India including Google Play, Apple TV+ and Amazon Firestick with a subscription now available for 149 per month and 499 per year.

Author - January 27, 2022
0
Tetraplegic sufferers are enslaved to their bodies, unable to communicate or move even a single limb. For years,...