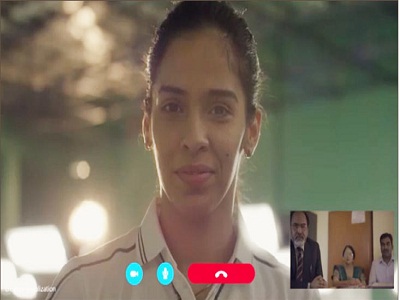 Microsoft has released the second film that is a part of its digital campaign called #MarkItHappen. This video is claimed to be a follow up to the one featuring Kangana Ranaut and it features the ace badminton player Saina Nehwal. The firm has been conceptualized by J Walter Thompson and it was aired on April 17.

Similar to the previous firm, this one starts with a disclaimed stating that the film is not based on the real events, but real hopes.

The video tells the story of Sabastian Joseph sports teacher and his fight to get the sports amenities for his students. The sports teacher works at an all girls school and he is seen talking about the lack of sports related facilities at the school. He talks about his fruitless efforts at getting the equipment in for the children at the school. He has also written to the school board and attempted to discuss to the principle, but there was no positive response.

The interview with the principal of the school says that since it is a girls’ school there is no place to invest on sports. He explains that it is better to spend money on building labs for the students. He further states that the school has good grades and around 65.4 percent pass rate that will make the students successful in their life.

The film lightens the message that informs audience that Joseph has set up a special call to the principal. When it fades in, we see Joseph walking into the principal’s office with a Microsoft phone in his hand and asking the principal to talk with someone. On a Skype call, it is revealed that the person who he was attempting to call is Saina Nehwal.

After congratulating the principal on the outstanding performance of the school, Nehwal goes on telling him that sports is also important and that a woman can frame a career out of sports. She claims that with proper dedication, support and motivation from educators, one can achieve greatness.

A time lapse is seen showing the school installing several sports amenities for the students. The film ends with a message reading Dreams, hope, ambition.