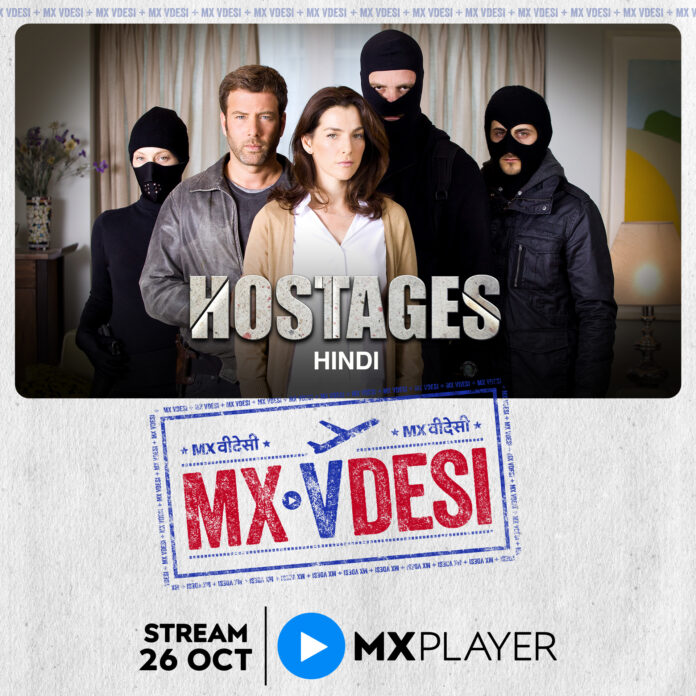 As we enter October, the festive mood sets in and watching some exciting shows tops all our lists. MX Player is geared up to fulfil all your entertainment needs and will keep you company with shows that will keep you wanting for more! Crowd-favourites, critically acclaimed and much anticipated international shows from all around the world dubbed in Hindi and other regional languages that it’s impossible to miss! Here’s a list of everything they’re bringing this October –

The Mandarin drama follows two sisters, Zhao Yu Xing and Qiu Qi, who were separated after being displaced by rebels that sought to kill them. The sisters have to navigate court politics and conspiracies as well as come to terms with their own heart. All 25 episodes of the series will now be available in Hindi exclusively from 1st October onwards.

Playful Kiss is a romantic comedy about a high school girl named Oh Ha Ni who moves into the home of her crush, Baek Seung Jo after her house is destroyed. The award-winning Korean drama follows their relationship through high school, college, and beyond. Will she be successful in winning Seung Jo’s heart? Tune in to this charming little drama, available in Hindi from 5th October onwards.

“Once Again” is a Korean story of the eventful Song family who can’t get a day of peace and their neighbours in Yongju Market. Song Young Dal, a frugal father, and Jang Ok Boon, a pushy mother, have been married for a long time and are worried about the future of their four children – one of which is set to get married and two of which are divorcees. Partway through, enigmatic kimbap restaurateur Kang Cho enters the battle and establishes a location in the Yongju Market. How will the other characters be affected by her appearance? Watch the show to find out. The show will be available in Hindi on MX Player from 8th  October onwards.

Set in the Ning dynasty, the story revolves around Xie Xiaoni, who aspires to become a business woman. After her family was framed and killed by the Su family, Xiao Ni vows to seek revenge for her family. She assumes the name of “Ni Chang” and enters the Yunjin Pavilion to learn embroidery skills. Over time with hard work, she managed to establish her position in the industry. Will the Su family find out her truth? To see what happens, catch the show, which will go live on 12th October. Originally in Mandarin, the show will be available in Hindi on MX Player

The Secret Life Of My Secretary – 15th October onwards

Min Ik, the Chief of Team 1 at T&T Mobile Media is a brilliant perfectionist with a heart of stone, who often relies on his fiery-tempered secretary, Jung Hee. She faithfully performs the chores that her abusive employer assigns her, but she is not afraid to express her opinions. What is the future of this hot and cold relationship? Watch all 16 episodes of the Korean drama to find out! Now also available in Hindi, Tamil, Telugu, Marathi, Bengali, Kannada and Malayalam, only on MX Player from 15th October.

This Filipino show is based on a military nurse Rhian Bonifacio who is a 2nd Lieutenant in the Philippine Armed Forces. However, she has a secret: she was trained to be a spy in the army by her adoptive father, Tiago Guerrero, to revenge against their mortal enemy Marcial De Leon, a high-ranking general. Bound by love towards the family she grew up with, she finds herself amidst the feud of two families- her fake family and the real.  Watch ‘The General’s Daughter’ in Hindi from October 19 onwards.

A satirical series that closely looks at the materialistic desires of upper-class parents in South Korea and how they ruthlessly secure the successes of their families at the cost of destroying others’ lives. The drama revolves around the lives of housewives residing in a luxurious residential area called SKY Castle (a reference to the elite universities) in suburban Seoul, where wealthy doctors and professors live. The wives are determined to make their husbands more successful and to raise their children to be top students who will be accepted at the best universities, so they use every possible way to get that. Watch the story unfold over the course of 20 episodes from 22nd October onwards in Hindi. The series is one of the most popular and watched Korean dramas.

In this Israeli crime thriller, Yael Danon, a renowned surgeon, is seen getting ready to operate on the Israeli president and is startled when a gang of four masked men kidnaps her family and gives her an ultimatum as she is told to assassinate him during the surgery in order to prevent the murder of her family. Everything goes awry the night before. Yael tries to save both the president and her family before it’s too late. Will she succeed? Tune in to find out what happens. All 22 episodes will be available in Hindi from 26th October onwards.

Watch these and more only on MX Player this October!