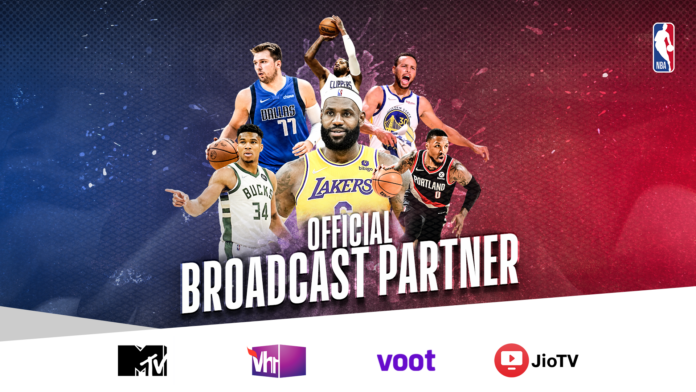 MUMBAI, December 3, 2021 – The National Basketball Association (NBA) and Viacom18 today announced a multiyear partnership to deliver live NBA games and programming to fans in India across television and over-the-top streaming.

Beginning with the NBA’s landmark 75th Anniversary Season in 2021-22, Viacom18 as part of the partnership enabled and supported by RISE Worldwide will provide comprehensive coverage of the NBA’s regular season and marquee events in English and Hindi through its television channels Vh1 and MTV, and through its digital platforms VOOT and Jio TV.  Coverage will include weekly live games, NBA All-Star, the NBA Play-In Tournament, the NBA Playoffs and the Finals.  Viacom18 will also show daily highlights and create original NBA-themed programming that will run on a number of channels across its network.

“While sports are the biggest whitespace that we are entering, to build a truly inclusive and differentiated proposition, we need to look at diverse sporting events from across the globe,” said Anil Jayaraj, CEO – Sports, Viacom18.  “Basketball is a sport that is increasingly gaining attention and affinity in India.  Through this partnership with the NBA, not only do we want to make basketball mainstream, but also build its lifestyle appeal among sports fans.”

“Globally, basketball is more than a sport – it is a lifestyle,” said Anshul Ailawadi, Head of Youth, Music and English Entertainment for Viacom18.  “As we look to build basketball into a cultural phenomenon in India, we welcome this deep partnership with the NBA.  Over the course of this association, we will be initiating a heavily localized marketing outreach and consumer connect programme aimed at building fandom for the sport.”

“We are thrilled to partner with Viacom18 to broadcast and stream live NBA games to a nationwide audience,” said Sunny Malik, Head of Global Content and Media Distribution, NBA India.  “Basketball’s popularity in India continues to grow, and by offering a range of NBA programming on Viacom18 in both English and Hindi, we look forward to reaching and inspiring millions of new and existing NBA fans across the country.”

In September, the NBA named Bollywood superstar Ranveer Singh the NBA Brand Ambassador for India and announced a collaboration with Lakmé Fashion Week, India’s premier fashion event, to celebrate the league’s landmark 75th Anniversary Season.  Singh will work with the NBA to help grow the league’s profile in India throughout its 75th Anniversary Season in 2021-22 and will be featured on “NBA Style” (@nbastyle_in), a new lifestyle-focused Instagram account for fans in India that showcases the convergence of the NBA and popular culture.