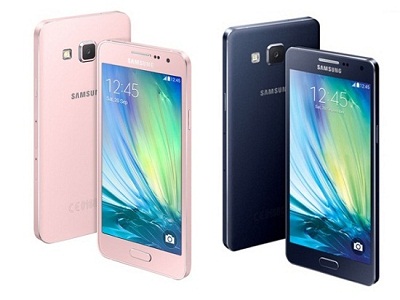 Halting all the rumors and speculations surrounding the new Galaxy A lineup of smartphones, Samsung unveiled couple of mid-range smartphones dubbed Galaxy A3 and Galaxy A5. However, the high-end model of the lineup, Galaxy A7 is yet to be launched officially. While Samsung has not announced the pricing of the latest launches, it has claimed that these devices will be made available from this month.

The mid-rangers follow the Galaxy Alpha in terms of aesthetics and boast of metallic unibody build and slim design that make the Galaxy A5 and Galaxy A3 the slimmest smartphones to be rolled out of Samsung’s stable so far. The Galaxy A5 carries a thickness of 6.7 mm and the Galaxy A3 measures 6.9 mm.

The Galaxy A5 boasts of a 5 inch HD 720p Super AMOLED display and makes use of a 1.2 GHz quad core processor of unspecified chipset that is teamed up with 2 GB of RAM. Fueled by Android 4.4 KitKat operating system, the smartphone bundles 16 GB of storage space that can be extended further by another 64 GB using a micro SD card.

Detailing on the imaging front, the Galaxy A5 flaunts a 13 MP primary camera that is supplemented with LED flash and support for FHD 1080p video recording. Also onboard are a 5 MP front facing selfie snapper and a 2,300 mAh battery.

On the other hand, Galaxy A3 is fitted with a 4.5 inch qHD Super AMOLED display that packs a resolution of 960×540 pixels. Likewise the Galaxy A5, its smaller kin arrives with a similar processor and storage, but employs 1 GB of RAM rather than 2 GB. The Galaxy A3 houses an 8 MP primary camera at its back teamed up with LED flash and FHD 1080p video recording as well and a 5 MP front facer. The handset gets energized by means of a 1,900 mAh battery.

The connectivity aspects of both the smartphones are identical with 4G LTE, 3G, Wi-Fi, Bluetooth 4.0, GPS/ GLONASS and NFC (only for the LTE variant). Also, they arrive with features such as Ultra Power Saving Mode to reduce enhanced battery backup, Private Mode and Multi-Screen. The adjustable audio feature will adjust and enhance the sound output depending on the user’s surroundings.

Samsung has launched the Galaxy A5 and A3 in a slew of vibrant colors such as Pearl White, Midnight Black, Platinum Silver, Soft Pink, Light Blue and Champagne Gold.

Teena Job - December 1, 2021
0
Today's generation is growing up on the internet. They are more receptive to technology. They want everything to be simple, flexible, and...