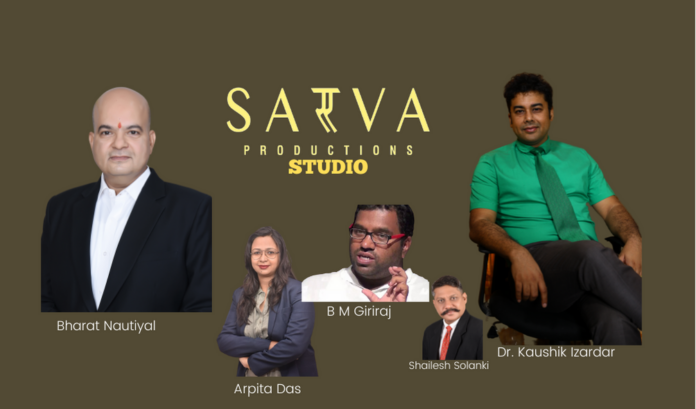 To create all forms of IP’s including feature films, web series & kid’s content

May 2022: Bharat Nautiyal, Founder & MD – Sarrva Productions Studio started this venture which will produce scripted and non-scripted content across multiple genres including digital, films and kids centric OTT platform. According to a report, the studio is tying up with a UK based venture capitalist and will put an initial investment of $30 million to create all forms of intellectual properties including feature films, web series and kid’s specific content.

Arpita Das, BM Giriraj and Shailesh Solanki have been appointed to the core team.

Arpita Das, has a Diploma in Film making and Graduation in Journalism and Mass Communication. She worked as a Creative head in Abhay 2, Ishq Par Zor Nahin, Shoona Square and many other projects. She has joined as Creative head in the Company.

B.M.Giriraj is a film and theatre director and has been actively involved in both fields for the past 17 years. He has directed over 6 films and three of the films, Jatta, Mythri, Amaravati have won State, National and International recognitions. Mythri had the luminous cast of Puneeth Rajkumar, Mohanlal, Atul Kulkarni and had Maestro Isaignani Ilayaraja behind the keys. He has written and directed 12 stage plays and has acted in more than 2000 street plays. His novel Kathege Savilla has won Sahithya Parishad award and his play Sugandhada Seemeyaache has won Nataka Academy award. He has also written and directed Karnataka government’s magnum opus Bharata Bhagya Vidhata, a dance musical based on the life of Dr Babasaheb Ambedkar with 75 artists performing on stage which was staged in all 30 districts of Karnataka.

Shailesh Solanki has joined as a production head in the company.

Welcoming all the professionals to the team, Sarrva Productions CEO, Dr Kaushik Izardar shared a statement saying, “We are delighted to have Ms Arpita Das, BM Giriraj and Shailesh Solanki to join our team to offer their expertise across varied fields to help establish Sarrva Productions Studio as one of the leading players in its genre. All of them have global management talent with a proven track record of driving significant growth and creating strategic value in companies. The addition of new members is a great way to continue furthering our objective of creating a world where individuals of all abilities are fully accepted, respected and included.”