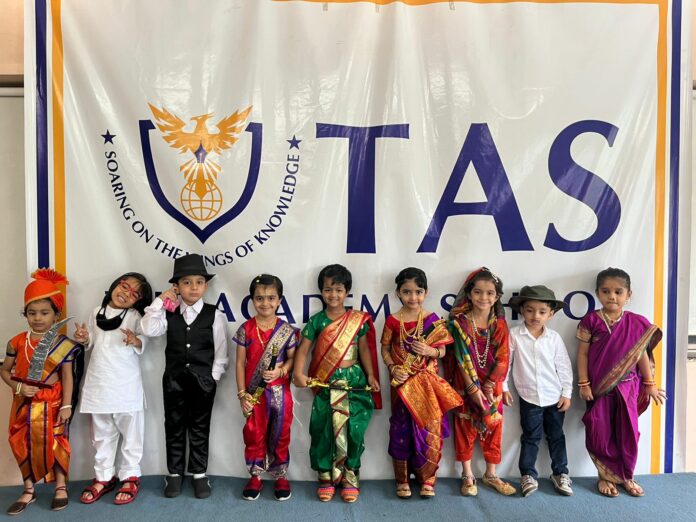 – Around 5,000 stickers and survey forms will be spread to as many households
– The activities are done under the TAS initiative, Independent Country, Independent Me, headed by Dr Maithili Tambe

Students of The Academy School (TAS), Pune, on the occasion of India’s 75th Independence Day, pasted national tricolour stickers outside every home surrounding the school to observe the ‘Har Ghar Tiranga’ campaign.

Under the ‘Independent Country, Independent Me’ initiative kicked off by The Academy School, the students will be the torchbearers in promoting the concept of independence and the advantages of attaining freedom. Around 5,000 stickers and survey forms would be given to as many households in the surrounding areas of the school.

Every student will be handed five stickers to be pasted outside people’s homes while also wishing them on Independence Day. Additionally, the students are also given survey forms wherein the resident would have to fill out a few details as to how they perceive India by giving ’75 seconds for [email protected]′.

“The survey is being conducted by TAS in order for children to stay in touch with their cultural heritage and roots. Also, it will be a window into understanding how the common man of today looks at India of the past, present and future,” said Saroj Raman, Principal, TAS.

The activity’s findings and results will be used by students to create case studies and the data will be analysed to create more engaging activities for children to have more real-time and practical learning.

“This is not just an activity since these will be a part of their applied learning. The 75th Anniversary of India’s Independence is not an occasion that comes every year. A national flag outside each home signifies unity and what better than children, the future of India, leading the way?” said Dr Maithili Tambe, CEO, TAS, who spearheaded the initiative.

Forest Essentials embarks on a new journey to reap the benefits...