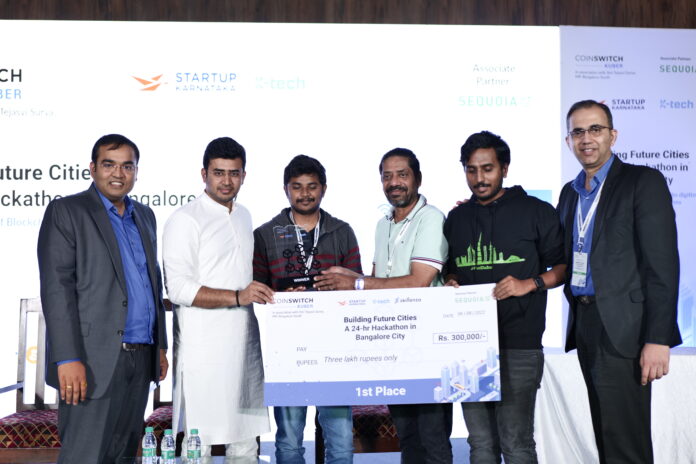 ‘TownSquare’ was named the winner of the 24-hour hackathon aimed at recognizing and stimulating blockchain-based solutions to everyday problems faced by India’s 1.2 billion people. The hackathon received over 2,200 applications from blockchain developers and innovators from all over the country.

“For any country to progress, to be a superpower in the true sense, investing in foundational technologies and investing in emerging technologies is a non-negotiable policy requisite,” said Tejasvi Surya, Member of Parliament, Bangalore South, at the award ceremony.

“It was inspiring to see young developers from different parts of the country develop blockchain solutions that address the real-world problems of Indians. At CoinSwitch, we believe this hackathon will kickstart a new innovation cycle that will lead us to a blockchain-powered India,” said Vimal Sagar Tiwari, Co-founder and COO, CoinSwitch.

‘TownSquare’ conceptualized and built a universal public platform to solve community issues using the power of blockchain. The platform helps citizens find a common consensus to identify and vote on civic issues that need to be addressed on a public blockchain was adjudged the best project of the 24-hour hackathon.

‘Marvelous’ and ‘Tautotree’ were declared runners-up. Marvelous leveraged blockchain to bring transparency to the real estate business, and Tautotree’s project was a convergence of tech and sustainable development — aimed at improving urban forestry.

The winners received a cash prize of Rs 3 lakh, and the total prize pool of the hackathon was Rs 6 lakh.

Passionate in Marketing - September 23, 2022
0
One97 Communications Limited that owns the brand Paytm, India's leading digital payments and financial services company and the pioneer of QR and...