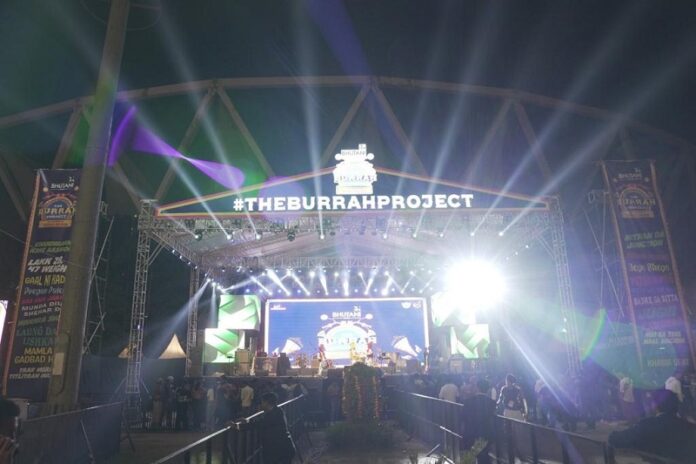 Delhi was on a Punjabi High this weekend! The biggest Punjabi music and food festival, ‘Bhutani The Burrah Project: Ab Chadhega Punjabi Fever’ started from the 18th November and continued till the 20th November. Held at Jawaharlal Nehru Stadium, New Delhi, the fest had some of the biggest names from the Punjabi music industry performing to keep the energy quotient of the people high. The festival was conceptualised and executed by Punjabi Fever.

The festival opened on Friday with an explosive dhol act, where 100 dholis created a synchronised act which filled the air with Punjabi euphorism, the crowd enjoyed the act thoroughly with everyone joining in with every couplet that were sung in Punjabi. The festival had two stages. The small stage was active during the day with acts planned from various colleges of Delhi, not only that popular RJs from Fever and Punjabi Fever were constantly engaging with the crowd with fun games like beer chugging, food eating, open mics, strongman, DJ war etc.

When it comes to food at the festival, The Burrah Project boasts of an eclectic mix of it! From crispy kebabs to heart-warming rolls, there was a wide variety to suit everyone’s palate. The festival had many beverage options as well. As the evening sets in, the grand stage lights up with the majestic backdrop of the JLN stadium.

The crowd swelled up in the evening on Friday as the weekend started and the main stage performances began with Vijay Mallik who sang some of the most popular Punjabi covers. Next came Rabica Wadhawan a FabMusic Beats artist with her powerful vocals enthralling the audience. She sang songs like ‘Munda dilli shehar da’ and ‘Ilzaam’ among her other hits. By the end of her performance, the crowd was already seen dancing and enjoying the night to the fullest. With Juggy D’s and Maninder Buttar’s performances as the second last and the last act of the day on Friday, the crowd went mad with many seen singing aloud along with the artist and the youth were dancing their hearts out!

Saturday, day 2 of the Burrah Project saw massive footfall recording more than 20k audience at the venue. Starting the day with Fun acts & house DJ the weekend kick started with Bhangra Performances while setting the right tonality for the evening. With Raashi Sood’s overwhelming performance & DJ Gouri’s set, the crowd were all seen grooving to the music. Thereafter Deep Money took the stage with his power packed Punjabi Dhol team. Next came Noor Chahal, with her melodious voice, this young nightingale added charm with her graceful presence and fans were enjoying her latest tracks with flashlights on. The ‘Bajre da Sitta’ fame is a new sensation amongst the youth who were seen singing along the tunes of her traditional tracks.

The headlining act on Saturday was Ammy Virk. The crowd went in a frenzy with his entry! The crowd was hysterical and echoed with loud cheer – Ammy Ammy Ammy! The most awaited moment of the event turned out to be limelight of entire Burrah Project. Ammy was thrilled to get such a great response from the crowd that he threw his Burberry jacket at the fans showering his love on them! The energy, vibe, line-up of songs, his aura and his love for the fans was unmatched. From his latest track of ‘Chann Sitare’ to his most popular Qismat’ title track the fans couldn’t have asked for more!

By Sunday 20th Nov. the festival was already the talk of the town! Delhi was buzzing about the festival & the incredible Punjabi artist line-up the festival boasted while beautifully uniting the Punjabi community, and discerning music fans from across the Delhi NCR. People even travelled from Punjab to attend this festival.

20th evening started with the trio Funky Boyz and Money Aujla who rocked the stage and paid tribute to Sidhu Moosewala, which was loved totally by the audience. Ali Chatley, AviJ with his gang Preet Zayne and Kevin Brown were up on stage next. Then came the Sufi queen Afsana Khan who is known for her high-octane vocals and is quite popular amongst the youth as well.

Headliner on Sunday was none other than the living legend Gurdaas Maan saab, the most revered artist in the Punjab circuit and still young at heart. From his enchanting voice to his traditional dance steps with dafli (traditional instrument) in hands, he took his fans heart away. Fans from across the generations were living this rare moment with his evergreen, most loved songs, which have become a legacy to the Punjabi music industry.

Every corner of this festival had a Burrah vibe, filled with colours of Punjab and quirky selfie corners. Social media was abuzz with 1000s of mentions about the festival. In case you missed the event, you can check out all the action at the Punjabifeverofficial social media handles on Insta, FB & YouTube.

CloudKeeper ranks in the top 5 partners globally in the Well-Architected...