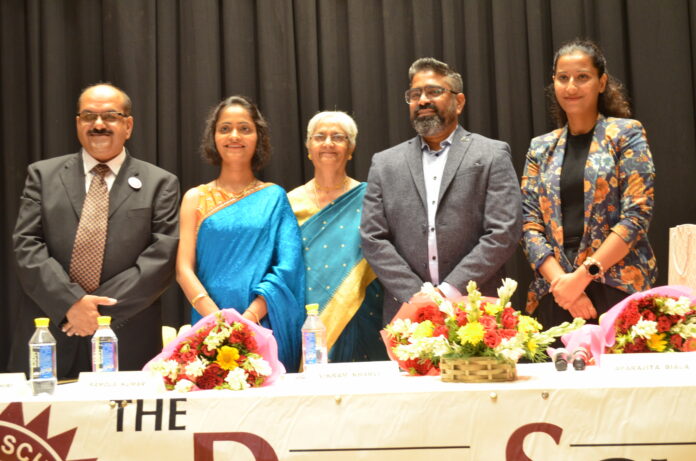 The formal Inauguration of the XXVIII Post-Graduate Diploma Programme in Communication was held on August 8, 2022, as DSC celebrates 28 years of Building Young India! With the world opening up, it was an offline inauguration ceremony that was held, after two years of treading online. The auspicious function began with a rendering of ‘Ganesha Vandana’, which added a vibrancy to the occasion.

Then followed a formal induction programme, and the final action was an ice-breaking session organized by PGDPC XXVII.

Welcoming the students to this profession, Mr. Kharvi started his talk with the evolution of communication. He pointed out, “Communication is as old as civilisation. In Ramayana, there was a character called Bhadro who used to report to Rama about popular feelings and perceptions in his kingdom. Even the great religious teachers, from Gautama Buddha and Sankaracharya to Guru Nanak and Kabir were master communicators”.

He added that “Now new technology is playing a key role – Metaverse will come and take away the lion’s share of the industry. Data-driven storytelling will be the new normal. Professionalism is getting more and more critical. Vernacular will go mainstrem. Fake news is coming up and it’s getting deeper and becoming believable. There is no other profession that rewards creativity and gives so much of a world view, as everyday is different”. He signed off saying that “professionalism is becoming critical. So, raise your standards as we are willing to learn from you”.Opening her speech, Ms Aprajita Biala said, “You are going to enter into perhaps the most thrilling part of your life”. She went on to explain – “If you are in the marketing communications space, life is going to be anything but boring and there will be no dearth of adrenaline. You have to keep pushing your boundaries to make sure that you add value to yourselves. Put your head down and work towards your dreams as each hour is an opportunity. Ultimately opportunities can be in the disguise of difficulty or change. At the end, keep a perspective that is your own. Step ahead and carpe diem.”

Prof. Ramola Kumar, Dean remarked – “It’s just the beginning of Bahubali 1. One needs to be the change itself and make things happen. Carve out your career graph.”

The Semester Scholarship award for Semester 2 went to Deepanita Mukherjee. The Admission Scholarships for an essay on – “If you had to give a piece of advice to your 18-year old self, what would it be?” was awarded to Mahek Shaikh for 1st position, Shreshtha Chaturvedi for 2nd position and  Mugdha Pande for the 3rd position.The Vote of Thanks was rendered by Dr Manik Katyal, Academic Council Member and the day ended with an ice-breaker session for the freshers, who were all set to embark on their new journey.

Passionate in Marketing - September 23, 2022
0
Mumbai, 23rd September 2022: Wardwizard Foods and Beverages Limited, the makers of QuikShef, is excited to announce its collaboration with multiple major...