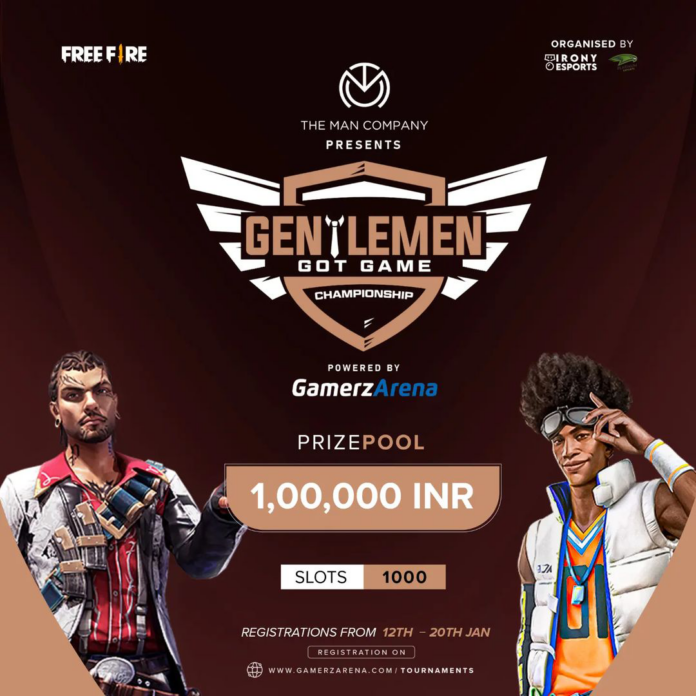 ●  In alignment with its ‘Bring out the Gentleman in You’ positioning, The Man Company aspires to imbibe Gen Z gamers to take three core pledges, essentially nurturing them as quintessential 21st-century gentlemen

● For the championship, registrations are now open, winners will get INR 1 lakh gratification plus a gift hamper by The Man Company, exciting discount codes will be distributed as participation perk

19th January, 2022: India’s first and leading homegrown men’s grooming essential brand, The Man Company, has tied up with Irony Esports, a community-first esports platform, and GamerzArena to launch a first-of-its kind gaming championship called Free Fire-Gentlemen Got Game Championship. The partnership strengthens The Man Company’s awareness-to-action journey and takes the ‘bring out the gentlemen’ in you positioning to new heights. Building on its primary vision to motivate grooming inside-out, the collaboration is a step further to connect with young gamers through esports, live streaming, and gaming channels.

Through this championship, The Man Company is following the Gen Z culture of live-streaming, passion economy, video gaming, and internet-based interest communities. The ‘Gentlemen Got Game’ initiative gives the brand the window to include Gen Z in their vision to create an evolved generation and motivate them to imbibe three key tenets of the Gentlemen’s Code of Conduct; a gentleman is respectful towards all genders, maintains grooming and hygiene standards, and most importantly, online or offline, he is mindful of diversity in culture, ethnicity, and identities and conducts himself accordingly.

The Free Fire-Gentlemen Got Game Championship is based on a popular battle royale game Free Fire for which the registrations have already begun for 1000 team slots and will be closed on January 19. It is open for all and can be registered through the GamerzArena website. The Grand Finale will be organized on January 29 and 30. The championship has a dual format that allows both ‘open’ and ‘invited’ teams to participate. It will be conducted in five phases after commencing on January 20. The winning teams will receive prize money of INR 1 lakh plus a handsome gift hamper. All the participants will be given exciting discount codes.

Speaking on this occasion, Hitesh Dhingra, Co-founder, The Man Company, said, “As we embark on the 2022 journey, we have decided not to make hard to complete new year resolutions but instead start a revolution in the right spirit. Since inception, we have been on the quest to promote inside-out grooming, and with the ‘Gentlemen Got Game’ theme we have decided to take our awareness-to-action journey to a new level.”

“Our motive is to fortify our ties with Gen Z as they are the future of our country through a medium in which they are comfortable. The intent is to start instilling the Gentleman Code of Conduct in them at a young age wherein they are more likely to absorb these relevant yet unprecedented thoughts. You can’t force someone to grow up as a gentleman. It is a matter of choice. We are simply here to help them make this choice in the right spirit.” He added

Further, Tushaar Garg, Founder & CEO, Irony Esports, said “In today’s internet culture nothing is more resonating, relatable and relevant for the everyday Indian gaming aficionado than ‘Bring Out the Gentleman in You’ message. I am pleased that The Man Company has identified gaming, esports and live streaming as a fertile ground for this story-telling and community building that will propel gen z to be mindful, real and authentic in their conduct. “

Brian Wilneff, Chief Executive Officer at Alpha Metaverse Technologies Inc. ‘’We are pleased to work with ‘The Man Company’ in their endeavor to not only provide the best product for their consumer, but also meet them in an environment that their consumer thrives in. Organic marketing through video games shows just how forward thinking ‘The Man Company’ is. With our expertise in the development and expansion of the Metaverse, this partnership provides ‘The Man Company’ an exciting entry point into the space for years to come.

Free Fire has become a well-known work name in the online gaming community in the last decade. A popular game in the mobile esports genre ‘battle royale’ begins with a group of players being dropped from a plane on a deserted island. These players now fight for their survival while scavenging weapons until only one winner remains. It is estimated that more than 500 million players play Free Fire in India.

Author - May 19, 2022
0
According to a survey conducted by the Internet and Mobile Association of India (IAMAI) in collaboration with OnePlus and RedSeer, the Indian...