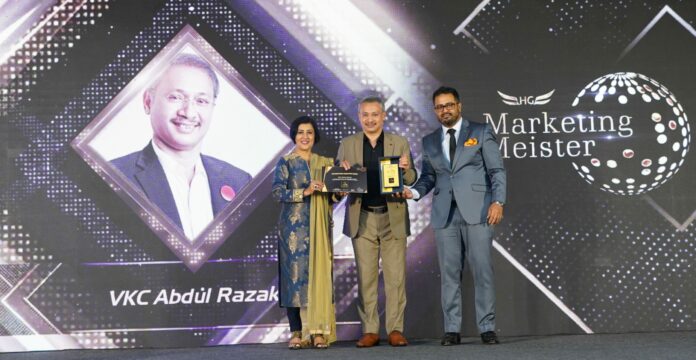 Kozhikode: VKC Pride, India’s leading PU footwear manufacturer, has been bestowed with the Brand of the Decade Award instituted by BARC, Herald Global and ERTC Media. VKC Group Managing Director VKC Razak and Director V Rafeeq received the award at a ceremony held at ITC Maratha in Mumbai. The honour was in recognition of VKC’s achievements in democratising the footwear and fashion industry in favour of the common people.

Along with this, VKC Razak was also selected as the Marketing Meister 2022 by BARC Asia and Jury Panel for his instrumental role in roping in Bollywood legend, Amitabh Bachchan to endorse a footwear brand for the first time during Bachchan’s over 50 years long career. Bachchan has launched four new brands of VKC, including India’s latest sporty fashion brand DEBONGO, which targets the global audience, in a span of one year. Big B launching four unique brands in a year for a single group is also a first of its kind in the world of brands in India.

On Nelson Mandela’s Death Anniversary, we share 3 interesting facts about...

Cybernetik ventures into a new domain of automated solutions involving the...

Kickstart the season with Christmas festivities at the Westin Gurgaon, New...