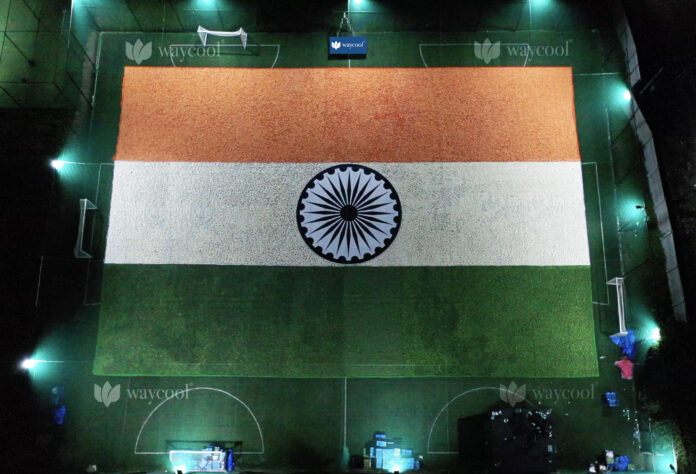 Bengaluru, August 13th, 2022: In commemoration of the 75th Independence Day – Azaadi ka Amrit Mahotsav, WayCool Foods, India’s leading food and agri-tech platform today created a first-of-its-kind food flag installation spread approx 7632 sq.ft near its Distribution Centre at Kannamangala, Bangalore. The food flag was symbolic of India’s successful transformation from a food scarce to a food surplus nation and a journey to become a food powerhouse for the world. It is also one of the largest producers of fruits and vegetables in the world. The fruits and vegetables being used in the creation of the flag were distributed to The Akshaya Patra Foundation immediately after the event. A refreshing take on the Har Ghar Tiranga Campaign, WayCool successfully recreated the tri-colors of the flag with a fine selection of grown-in-india fresh produce like carrots, radishes, green okra, beans, capsicum, as well as value added products such as Potato flakes, and more. Over 20 tonnes and various varieties of fresh produce were used, this showcasing India’s incredible versatility and diversity of agricultural output The saffron was represented by carrots, radishes and potato flakes forming the white & the flag was given a magnificent finish of green with capsicum, beans and ladies finger (green okra).

The company also used its storage and handling technologies to ensure that not a single gram of the produce used in the display was wasted, and the produce was handled with the best hygiene practices. The produce was then donated to Akshaya Patra Foundation. One of the largest Food Flags created, the company also ensured that it fed the needy with near to zero food wastage.