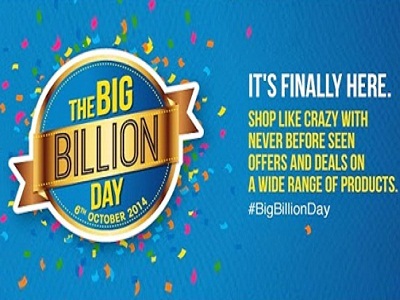 Amidst the hype and ordeal created by the full page advertisements on major newspapers all over India, e-commerce giant Flipkart announced “The Big Billion Day” sale on Monday, October 6. The e-retailer provides a slew of products in almost every category at tempting pricing with numerous discounts and offers. In order to render this sale more irresistible to the consumers, it announced that there will be an additional 10 percent discount for the users of Citibank or Standard Chartered credit cards on shopping with them.

The mega sale kicked off at 8 am on Monday and within minutes, most of the attractive deals went out of stock. Those consumers who started with shopping after 10 am were desperate as most offerings were sold out. Moreover, by noon, the Flipkart servers crashed creating a huge demand and disrupting the services further.

Following this mishap, Flipkart’s #BigBillionDay hashtag on Twitter was trending and and it was followed by other criticizing hashtags such as #Flopkart, #Failkart, #Fraudkart, and more. The frustrated and cheated consumers took to Twitter to express their high levels of dissatisfaction. Gradually, Flipkart managed to earn more and more angry customers that the number grew rapidly against the satisfied ones on the “The Big Billion Day” sale initiative.

But, Flipkart founders Sachin Bansal and Binny Bansal claim that “The Big Billion Sale” was a great success and that it is the biggest sale ever inIndia. They claim that there was an overwhelming response from customers since the launch of the sale. But, consumers on the other hand feel that e-tailing firm is repeating the flash sale trend that it debuted with the Xiaomi Mi3 and Redmi 1S smartphones inIndiain August for this big sale day as well.

The primary reason for the failure of “The Big Billion Day” is that the products were going out of stock instantly even before the consumers could realize. For instance the Re 1 hand blender and Rs 200 hard drive were not on stock despite their tempting pricing. Moreover, there were problems related to the shopping cart as well.

Consumers have reported that despite adding products to the cart and paying the full amount, the cart got cleared in a while without their notice. In addition, the most sensitive issue regarding the pricing of the products on Flipkart. It is alleged that several products were available at lesser prices on competitor websites such as Snapdeal and Amazon without any offer. Also there are complaints from users that the e-tailing firm has raised the prices of the products and slashed them by 80 percent instead of being straightforward.

But, it has to be noted that Flipkart has managed to satisfy few consumers by helping them successfully buy what they wanted. Of course, this has been made possible after few tries great luck. The vendor has sold $100 million that translates to Rs 600 crore of sales in 10 hours that is more or less the same amount achieved by Snapdeal as well.

Coming to a conclusion, the entire issue behind this is due to two things one is the problem of not having adequate stock for the most sought after products and lack of poor infrastructure such as server issues that should have been looked upon before the start of the mega sale.

Import duty on high end cars and wines to come down

US mattress brand Serta makes its foray in India

Case in Marketing Strategy: Is it time for Micromax to deliver...

Television, the most preferred medium by Indians to learn about company...

Internet of Things Occupies Priority List of Global Firms in 2015