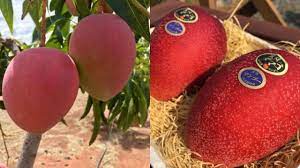 A variety of the King of Fruits is grown in Miyazaki City, Japan, and it just might alter your perception of the yellow and red fruit. mostly due to the purple color of this mango!

Even though Uttar Pradesh, which produces the most mangoes annually with a share of 23.47 percent, is renowned as the “country of fruits,” this purple mango is nevertheless the priciest kind available.

The Kyushu prefecture of Japan’s Miyazaki city is where the Miyazaki mango was first cultivated. The name of the variety comes from the place of origin. The mango typically weighs about 350g and contains 15 percent or more sugar.

The mango is well-known for being different from the typical mango kinds that are well-liked in Southeast Asia and India in terms of shape and colour. According to reports, the fruit is ruby in colour.

“Egg of the Sun” is another name for these mangoes (Taiyo-no-Tamago in Japanese). Mango Miyazaki trivia

These mangoes are grown between April and August, when the crop is at its peak, according to the Miyazaki local products and commerce development centre in Japan.

According to Japanese media sources, Miyazaki mangoes are among the most costly in the world and last year sold for 2.70 lakh per kilogramme on the international market.

According to the Japanese trade promotion centre, the Miyazaki is a variety of “irwin” mango that is distinct from the yellow “pelican mango” that is often grown in Southeast Asia. Mangoes from Miyazaki are distributed throughout the country and are Okinawa’s second-largest producer in terms of output.

The trade promotion center stated that these mangoes are wonderful for people who require help with sleepy eyes because they are high in antioxidants, include beta-carotene, and contain folic acid. Additionally, they aid in avoiding vision loss.

Before being shipped around the island nation, the Miyazaki mangoes are subject to stringent inspection and testing. “Eggs of the Sun” are those that meet the strictest criteria for quality. These mangoes resemble dinosaur eggs in shape and are frequently fiery red in colour.

Mango manufacturing reportedly began in Miyazaki in the late 1970s and early 1980s, according to local press accounts. According to accounts, Miyazaki’s warm climate, extended daylight hours, and copious rain made it viable for farmers to engage in mango farming. It is now the main produce in this area. Indian mangoes

India is home to numerous different mango varieties, including Bainganpalli, Himsagar, Dussehri, Alphonso, Langda, and Malda. Mangoes are a popular export from India to other countries.

However, the Miyazaki type, which was first grown in the Japanese town of Miyazaki, continues to be the most expensive variant.

The variety is currently grown in India, Bangladesh, Thailand, and the Philippines. Two of these mango trees, which are reportedly being guarded by security personnel and dogs, are said to be growing in Jabalpur, Madhya Pradesh, at a couple’s property.