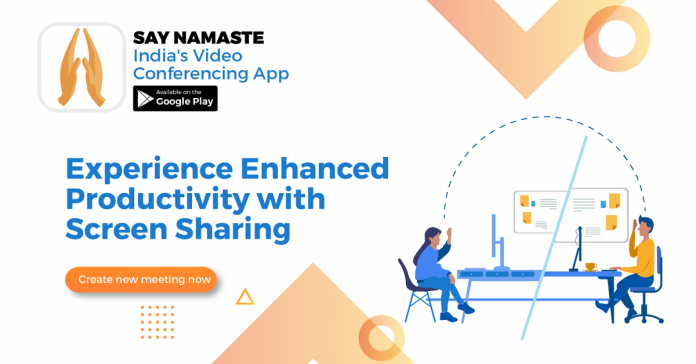 There is a surge in the demand for homegrown apps in India after Prime Minister Narendra Modi’s call to go ‘Vocal for Local’ coupled with anti-China sentiments. There is increased popularity seen in ‘Say Namaste’ that claims to be India’s very own video conferencing app and promote themselves to be an alternative for video conferencing app Zoom.

The video conferencing app ‘Say Namasthe’ is developed by a Mumbai based company which sees an increase in demand recently. The app provides its user features like group video calls (up to 50 minutes at a time, but allows users to easily restart the call) or one to one conversation and an option to chat via text with participants during the call. And it allows users to send audio/video files, images, PDFs, presentations. Say Namasthe app can also be used for audio/voice calls which can be handy in times of a patchy network. The app supports screen-sharing via a desktop/laptop.

The mobile app can be downloaded from the Google Play Store on Androids and Apple App Store on IOS.  Users can also have video calls through the official site of Say Namasthe. The app does not ask the user to sign in to conduct or attend meetings. But to enter the meeting you must give your display name, the meeting ID, and the code. The app is restricted to Google Chrome and does not support Apple Safari.

But there were some issues faced by the users like lag in connecting to the video calls and struggle in creating meetings in the app. The website responded to this issue telling that it may be due to lakhs of Indians using Say Namasthe. Users are also concerned about the security of the app as there is no mention of an end to end encryption in the app. But the privacy policy of the website assure that they maintain appropriate administrative, technical, and physical safeguards to protect user information from unauthorized destruction. So, the app is currently engaged in correcting the issues raised by the users and become a strong alternative for the video conferencing apps like Zoom.

Panasonic embraces a new strategy for customers across the channel

Passionate In Marketing - November 20, 2020
0
Japan’s leading electronic and home appliances company, Panasonic has come up with a new strategy to engage with their customers across the...