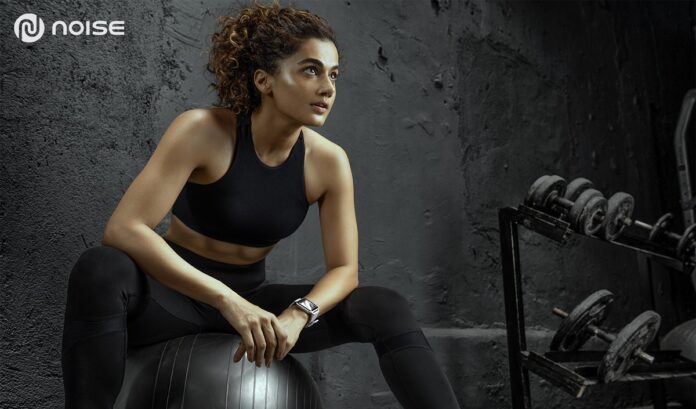 The brand hopes that by doing so, Noisemakers will be inspired to never give up and to face obstacles head-on by listening to their inner voice and intuition. Noise has published an ambitious film that is live across Noise’s social media networks – Facebook, Twitter, and Instagram – as part of the digital campaign.

Noise’s primary concept in listening to the noise within and believing in oneself – dil ka shor – is central to the newly launched campaign’s narrative, which perfectly mirrors Taapsee Pannu’s career trajectory.

This ad aims to inspire today’s young and millennials to believe in themselves without being influenced by intimidating ideas and the “Shor” outside.

Taapsee Pannu’s inspiring narrative of following her inner voice to overcome her challenges and emerge as an independent, self-made performer is depicted in a new 10-second film released lately.

The actor is seen wearing Noise’s wristwatch and following an indomitable passion for fitness, which resulted to her new transforming image. Her voiceover narrates people’s negative opinions intended to discourage her, but she suppressed these thoughts/voices to #ListenToTheNoiseWithin. The footage has been shared on Taapsee’s social media sites.

Taapsee is known for her enthralling performances and exciting characters. Her triumph is a testament to her determination to overcome obstacles.

“We are immensely elated to launch our first campaign with Ms. Taapsee Pannu,” Amit Khatri, Co-Founder Noise, said of the campaign. She has a one-of-a-kind, high-spirited, and aggressive persona that aligns with Noise’s key ideals. When it comes to suffocating the murmuring voices and rising to the challenges to be better than before, our synergies are in sync.

Our main goal with the Taapsee campaign is to show Noisemakers that obstacles will never stop them if they listen to their instincts and follow their hearts, even if they are surrounded by ugly sounds. We’ve always emphasized the significance of paying attention to your ‘dil ka shor,’ and Taapsee is no exception.”

“Time and time again, individuals tried to bring me down or reduce me with their criticism,” actor and star Ms. Taapsee Pannu stated, “but I made sure I ignored the dispiriting words.” The most important thing I’ve learned on this road is to believe in myself and never lose contact with my inner noise.

Noise will release a series of films with Taapsee Pannu as part of the campaign, showing several goods from Noise’s wearable portfolio. Noise has been meeting the growing demand for wearable gadgets in India and has risen to the top of the industry. The brand is preparing for a flurry of interesting campaigns and launches in the coming months.