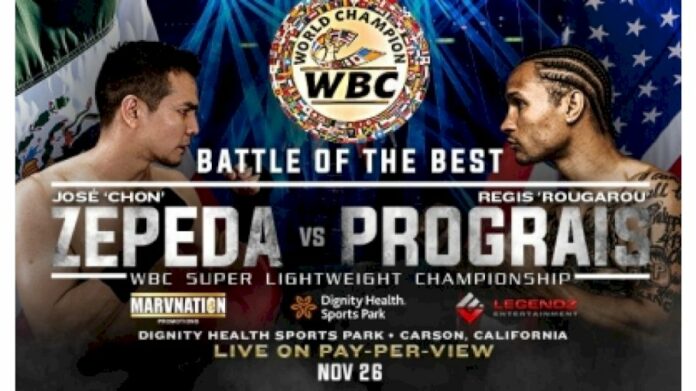 India, November 18, 2022: Xfinite’s Mzaalo, a blockchain-based video streaming application in the entertainment ecosystem will livestream the highly anticipated Jose Zepeda vs Regis Prograis fight for the prestigious World Boxing Council (WBC) Super Lightweight World Championship over 12-rounds on Sunday, November 27 at 7.30 AM – 11.30 AM IST. The championship will take place at ‘The War Grounds’, Dignity Health Sports Park in Carson, CA, US. Mzaalo has acquired India livestreaming license from Legendz Entertainment LLC based in California, US.

The WBC belt has been up for grab since July 1, when Scotland’s Josh Taylor (19-0, 13 KOs) relinquished the crown in lieu of a mandatory title defence against Zepeda.

Zepeda was originally due to fight with former champion Jose Carlos Ramirez, whose own desire to challenge for a second title reign was affected by the delay in the belt becoming available.

Jose Zepeda, says, “I’m really excited about this fight finally happening. This is not like other fights. This is the top two in the 140lb. division, fights like this you don’t see in boxing anymore. This is a real fight, and the best part is that the fans are aware of this.”

Vikram Tanna, CEO, Mzaalo, says, “We are thrilled to extend Mzaalo’s content offering by livestreaming a boxing match of this scale for the fans and provide them with the opportunity to earn rewards too. Zepeda vs. Prograis promises action from the opening bell and the winner will not only be crowned the champion but will also go down the history as one of the best 140-pounder in the world of boxing.”

In recent years, Jose ‘Chon’ Zepeda’s fights have been full of non-stop action combined reflecting his fierce Mexican warrior spirit. On October 3, 2020, Zepeda defeated former world champion Ivan Baranchyk in an epic battle termed as the ‘Fight of the Year’. The fearless Zepeda defeated Baranchyk in the fifth-round that saw each fighter rise from the canvas four times.

Zepeda once again validated his remarkable reputation with a stunning first round knockout of top-rated contender Josue Vargas on October 30, 2021, at Madison Square Garden.

Most recently, Prograis showcased his extraordinary power, when he defeatedTyrone McKenna in the sixth round on March 19, 2022, in Dubai. Previously, the exciting southpaw had knocked out Ivan Redkach in the sixth round on April 17, 2021, and Juan Heraldez in the third round on October 30, 2021. Prograis did not lose a round in any of the three contests.

Passionate in Marketing - November 28, 2022
0
New Delhi, India 28th November 2022– Crocs, Inc., is a worldwide leader in innovative casual footwear, is going to launch its yet...

Talkwalker and Twitter come together to release their latest Birdseye report

WorkIndia reports that the age group between 18-30 have the maximum...