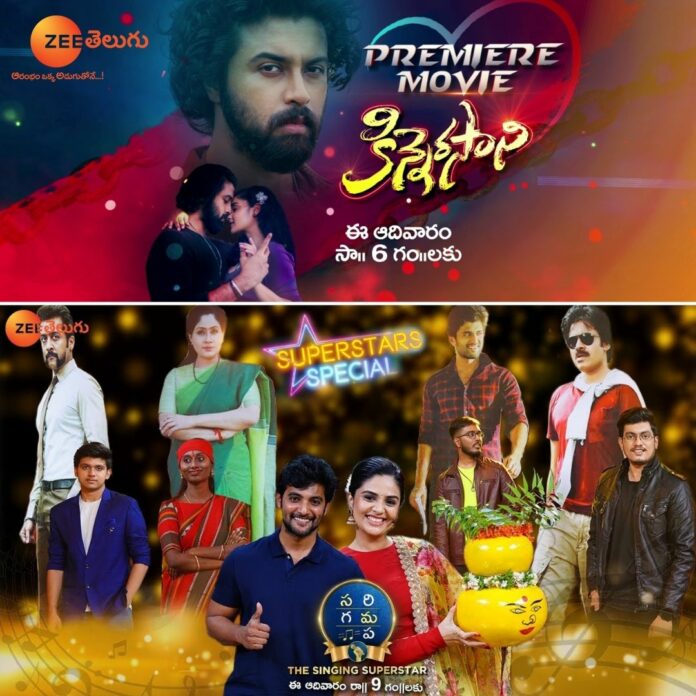 Hyderabad, 30th June 2022: After presenting Prabhas’ epic romantic thriller – Radhe Shyam last time around, Zee Telugu is all set to take its viewers on another thrilling adventure this Sunday. With back-to-back popular movies being aired on the channel every weekend, the audience is surely in for a special treat. In fact, this Sunday, the channel is all set to air the World Television Premiere of the nail-biting crime thriller Kinnerasani. The action-packed and suspense-filled movie will surely keep the viewers at the edge of their seats as it airs on 3rd July from 6 pm to 9 pm, only on Zee Telugu.

Written by Desharaj Saitej and directed by Ramana Teja, Kinnerasani stars Kalyaan Dev and Ann Sheetal in lead roles. While Kalyaan Dev plays the role of Venkat – a lawyer who doubles up as an intelligent investigator, Ann Sheetal plays Veda who is a gifted individual with the special ability to read people’s minds and sense their inner thoughts. When Veda finds a book speaking about how her father is trying to kill her, she is confused. She runs into Venkat and asks for his help to solve the mystery. On the other, Jayadev, played by Ravindra Vijay, is out there murdering everyone with the name – Veda. With a lot of twists and turns in the tale, Kinnerasani is a must-watch. In fact, the refreshing songs, thrilling background music, impressive screenplay and cinematography will surely keep the audience hooked this Sunday!

Tune in to the World Television Premiere of Kinnerasani at 6 pm and the special episode of Sa Re Ga Ma Pa – The Singing Superstar at 9 pm on 3rd July, only on Zee Telugu!

Passionate in Marketing - August 11, 2022
0
75 years since India rose as an Independent republic- we have been strengthened by our diverse cultures, languages, and customs, and indomitable...