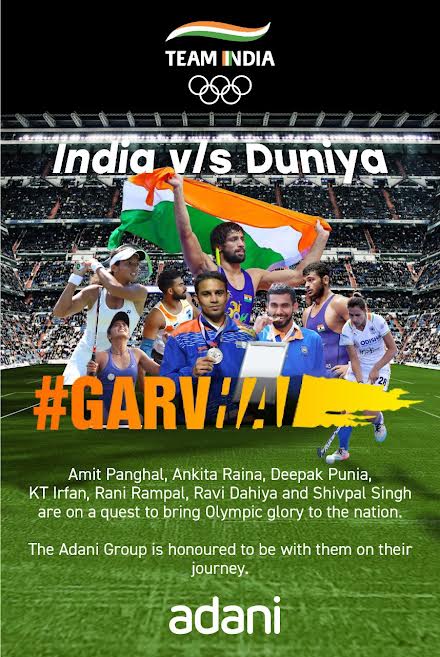 Hyderabad, 23 July 2021: The Adani Group has become an official partner of the Indian Olympics Contingent at the Tokyo Olympics, which opens on 23 July 2021. The Indian lineup in Tokyo includes 119 athletes, India’s highest ever total at the Olympic Games.

The Olympic partnership is in line with the Adani Group’s belief that corporate support for the nation’s sporting ecosystem will build a better and stronger sporting future.

Garv Hai, the Adani Group’s long-term incubation programme to identify and nurture India’s sporting champions of the future, was rolled out in 2019 after completing a four-year pilot project launched before the Rio Olympics in 2015.

Ten junior and nine senior athletes were nurtured under the Garv Hai initiative, of which seven qualified for the Tokyo 2020. Every one of the seven Garv Hai athletes is a great story of talent, determination and effort combining to overcome challenges, setbacks and hardship.

Mr. Pranav Adani, MD – Agro, Oil &Gas, said, “I am proud of these athletes who are representing our nation on the world’s greatest sporting stage. The courage, commitment and conviction they have shown to reach this height of excellence already make them winners. Their heroic journeys inspire us as a nation. I wish them the very best, and we, as one nation, will always be proud of them no matter the outcome.”

More details about the program is available here https://adanisportsline.com/Garv-Hai