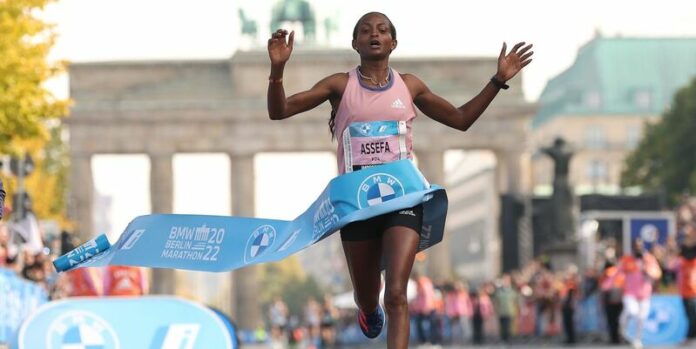 Mumbai, September 26, 2022: It was a stunning victory for adidas’ Tigist Assefa in the 48th Berlin Marathon today, as the Ethiopian athlete proved that Impossible Is Nothing in the German capital. The winning time of 2:15.37 was the third-fastest marathon of all time, closely behind Paula Radcliffe and Brigid Kosgei.

Wearing adidas’ record-breaking ADIOS PRO 2 (https://www.adidas.co.in/search?q=adizero%20adios%20pro ) shoes, the victory marks the latest success for Assefa, having only ran her first marathon in March earlier this year. Knocking a staggering 18 minutes 24 seconds off her personal best, the Ethiopian dominated the field to come out on top, breaking the course record by almost 3 minutes.

It was an adidas podium sweep in the Women’s Marathon, with Assefa facing stiff competition from Rosemary Wanjiru, who finished second in 2:18.00 on her marathon debut. Making the impossible possible, Assefa had to dig deep but managed to hold on for the victory over fellow adidas athletes Wanjiru and Abayechew.

Speaking after her win, Assefa said: “Wow, what a day! I’ve worked so hard in training and so coming here to Berlin and winning has made it all worthwhile. This is a huge victory for me, becoming third-fastest of all time at the marathon, and really proves that Impossible is Nothing. Thank you to everyone who helped me achieve this today, I feel so proud and grateful.”

Meanwhile, in the Men’s Marathon, it was a podium second place finish for Mark Korir, with an impressive time of 2:05.58. Korir’s silver medal concluded the podium dominance for adidas’ ADIZERO range, wearing the ADIOS PRO 3 shoe.

Also competing in the Men’s Marathon were adidas’ Andamlak Belihu and Abel Kipchumba, who finished fourth and fifth respectively. Both Belihu and Kipchumba got huge personal bests, with Belihu beating his previous best time by over 3 minutes. Belihu went out very strongly in the first half of the race, running alongside Kipchoge to go sub-60 at half-way, but Korir and Abate came back strongly in the second half to take the podium places.

After helping the world’s best runners smash seven World Record[OS1] s in the past two years, the adidas ADIZERO franchise has undoubtably proven its dominance. Developed with and designed for the fastest athletes, major successes of the ADIZERO franchise include:

·       Peres Jepchirchir setting a new Half marathon World Record in the ADIZERO Adios Pro 1 in 2020.

·       Tamirat Tola, becoming World Champion in the men’s marathon in Oregon this summer – in the ADIZERO Adios Pro 2 – smashing the World Athletics Championships record which has stood since 2009.

On Nelson Mandela’s Death Anniversary, we share 3 interesting facts about...

TVS Emerald acquires its second land parcel in Bengaluru with a...

Disney grants to benefit communities and wildlife in 25 countries

34% said they notice in-store promotional offers – as per Axis...

TVS Emerald acquires its second land parcel in Bengaluru with a...