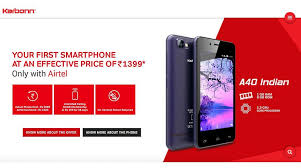 In an effort to counter the move of Reliance Jio in the handset space, Airtel announced its tie up with Karbonn Mobiles to offer a 4G smartphone. In what is termed as a killer pricing, Airtel will be offering 4G enabled smartphones of Karbonn at a effective price of Rs.1,399 which nearly Rs.101 cheaper than that is being offered by Reliance Jio. Later this year, Reliance had announced that they will be coming out with a 4G enabled feature phone for Rs.1,500 which they will be collecting as a security deposit and the company will be making a full refund of the same after three years. This makes the device virtually free for the customers.

In what is termed as truly revolutionary, Airtel will be offering the smartphone at the price of a feature phone and this is set to intensify the war in the telecom sector. The Android-based 4G smartphone, Karbonn A40 Indian, has dual SIM slots and popular apps.

In an official statement Airtel explained that “A customer needs to make a down-payment of Rs 2,899 for the 4G smartphone and make 36 continuous monthly recharges of Rs 169 each. The customer will get a cash refund of Rs 500 after 18 months and another Rs 1,000 after 36 months, taking the total cash benefit to Rs 1,500.” The customer need not return the handset to Airtel or Karbonn at any point to claim refund.

Raj Pudipeddi, Director – Consumer Business & CMO, Bharti Airtel said, “We are delighted to partner with Karbonn to remove barriers to smartphone adoption and enable millions of Indians to leapfrog to a full touchscreen smartphone experience. We plan to partner with multiple manufacturers to bring affordable smartphone options to the market and build an ‘open ecosystem’ of low cost devices. This is yet another step in our ongoing journey to deeply understand customers and bring innovation that delights them.”

Passionate In Marketing - August 16, 2014
0
Aug 16, 2014:  In order to make India a hub for manufacturing, the country’s new Prime Minister Narendra Modi has given an open invitation...

For India, From India – The Campaign Gains Pace

Amkette to launch a gaming device below Rs 10,000 price tag