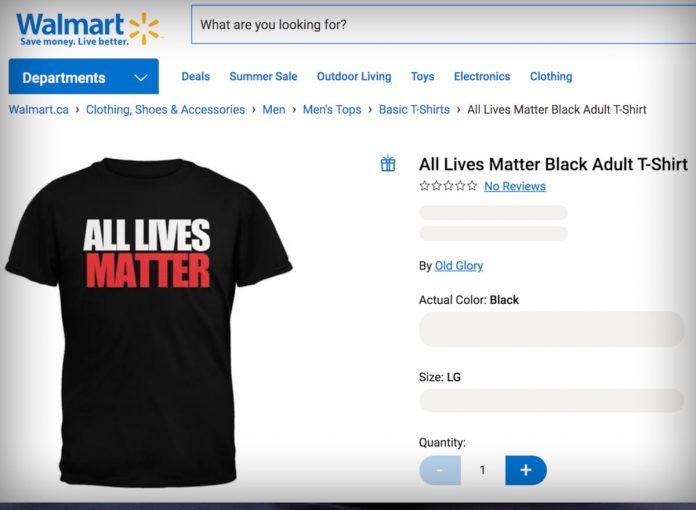 Walmart Inc. well known for its hypermarkets, departmental store, and grocery stores which sells products at a discounted price, has recently brought down its T-shirt which says ‘All Lives Matter’ from Walmart website after the allegations of racism which went viral on social media sites.

A strongly expressed demand or request for equality given to the Black Lives Matter (BLM) movement. The essence of the energizing cry at fights reciting ‘Black Lives Matter’ is that they’re requesting that the race matter as much as different races do. The development isn’t about Black prevalence, yet rather concentrates more on equality.

Walmart will stop the sale of “All Lives Matter” stock on its site, taking note of that it is putting its accentuation on Black individuals and other people of color whose lives are being affected by continuous racial injustice.

Notwithstanding, in the battle for equality, individuals and brands have been utilizing the propaganda that stresses ‘All Lives Matter’. The message has been gotten out as hazardous. The rationale behind this is the battle against bigotry includes all races, yet all races aren’t similarly influenced by racism/discrimination and that’s the reason that Walmart T-shirt has been going through continuous backslash in social media platforms like Facebook and Twitter. The T-shirts were accessible on Walmart’s web-based shopping portal. It sold T-shirts that said ‘All Lives Matter’, ‘Blue Lives Matter’, in addition to other things. Online customers rushed to bring up that this detracts from the battle against racism and called Walmart to expel the product.

The statement which was given by Walmart spokesperson to CBS news that Walmart fundamentally believes that all lives do matter and everyone on this planet deserves respect. This was the reason for them to launch those T-shirts on the online platform. But as they listened and understand the problem of their customers they came to know that few people using the phrase ‘All lives Matter’ in the current condition, deliberately limited the attention on the difficult truth of racial imbalance.

Starbucks, the coffee chain, additionally confronted reaction for not permitting its Baristas to wear T-shirts supporting the Black Lives Matter movement. Not long after it confronted online media backslash from various users, Starbucks declared a line of merchandise that named their T-shirts with the Black Lives Matter theme. On their website, Starbucks informed that it would band together with the Starbucks Black Partner Network and Black Starbucks pioneers to make 250,000 shirts accessible to its organization worked accomplices in the US and Canada to avow support at this crucial time ever.