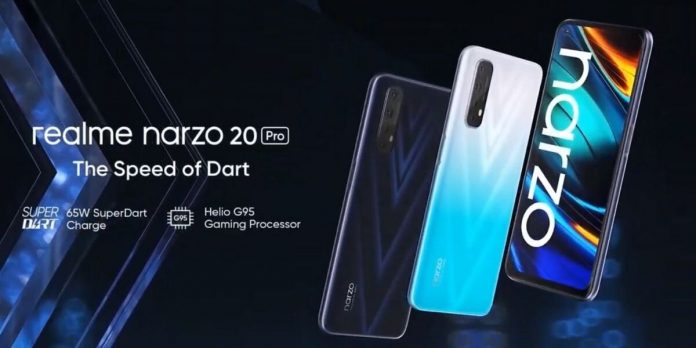 The latest Narzo 20 series was released by Realme, just a few months after the company introduced the Narzo 10 series sub-brand. Three new smartphones have been introduced to the new Narzo 20 series:  Narzo 20, Narzo 20A, and Narzo 20 Pro. The Narzo 20 Pro comes with specifications addressing a gaming audience and is the most costly of the three.

The Realme Narzo 20 bears a similar 6.5-inch FHD+ LCD panel and the Snapdragon 665 processor. The same 8MP front camera along with a wildly different triple-cam configuration on the back, comprising of a main 48 MP camera,8 MP ultra-wide-angle shooter, and a macro lens. The selfie camera remains an 8 MP shooter, however. The 4/64 GB costs Rs 10,499, while the 4/128 GB model will be sold at Rs 11,499.

The MTK Helio G95 processor is featured in the Realme Narzo 20 pro. The company argues that the processor is designed solely for a better gaming experience. Two high-performance 2.05GHz Cortex-A76 cores at up to 2.05GHz and six high-efficiency Cortex-A55 cores at up to 2GHz are also equipped with the device, along with the Mali-G76GPU 900MHz. The Realme Narzo 20 Pro is also equipped with cooling systems for carbon fibers that can cool up to 8.6%.

According to the manufacturer, the Realme Narzo 20 Pro receives 65W SuperDart Charge, which can power up the 4500mAh battery to 100 percent within 38 minutes and 14 percent in 3 minutes.