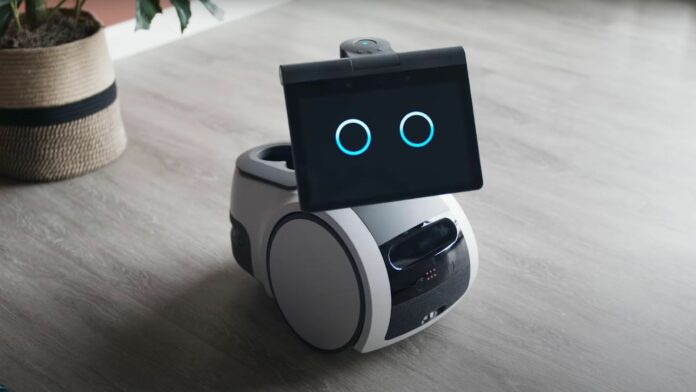 The Astro home robot is Amazon’s first smart-home gadget powered by Alexa technology, the smart-home technology. The Astro is around two feet tall and weighs about 20 pounds. Its primary driving wheels are roughly 12 inches in diameter, large enough to pass door thresholds and go through the carpet, and maintain balance by a single caster in the back. The Astro has a peak speed of one metre per second and can travel in 360 degrees, forward, back, or in whatever direction it wants.

There are five different motors inside the plastic-clad shell: one for each drive wheel, one to raise and lower its periscope camera, and two to twist and tilt its “face.”

The screen from an Echo Show 10 creates that face. It has a sensor array in its bezel, as well as a standard 5-megapixel video calling camera. Two circles are shown as eyes on the screen most of the time so you can see what the Astro is doing and where it intends to go.

The Astro, according to Amazon, can do a wide range of tasks that you might expect from a household robot. It can draw a floor layout and follow directions to a specific room. It can detect faces and deliver things to a particular individual. Like every other Echo display, it can play music, display the weather, and answer questions. It can use for video calls, and it physically follows your motions to keep you in the frame.

When you’re not at home, it may walk around your house, checking sure everything is in order. It can collect data like blood pressure via third-party accessories.

Astro’s computer vision allows you to utilise him as a surveillance camera to keep an eye on what’s going on in your home while you’re gone. Astro doesn’t appear to be able to play with your pets just yet, but thanks to its unique periscope camera, they can check to see whether your dog has wrecked your sofa or if your cat is resting on the topmost shelf. It also uses its periscope camera to check if you’ve switched off the stove.

However, as ambitious as the Astro is, it is still only a first draught of what a home helper robot may be. It lacks arms and appendages; it can’t clean your floors; it can’t climb stairs; it can’t leave your house; it probably can’t do a billion other things.

According to engineers who supposedly worked on the robot and talked anonymously to Vice, Astro is “terrible,” a “disaster not ready for release,” and “potentially dangerous.” Another source claims that the house robot is considerably more fragile than its high retail price implies, with the camera mast frequently being stuck in place and it “nearly certainly hurling itself down a flight of stairs.” Astro may be helpful to some extent, but it may intrude on your privacy.