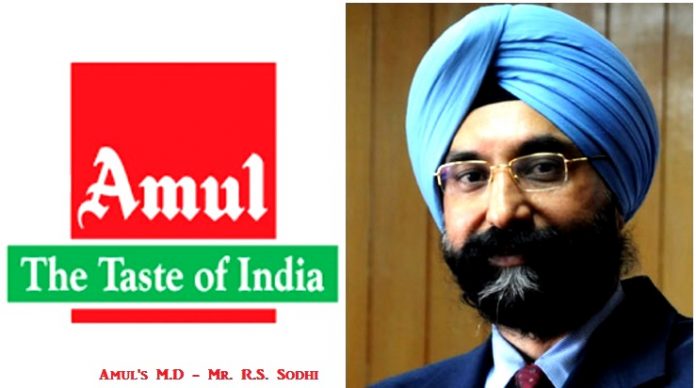 The lock-down wasn’t sudden, and Amul was prepared for the eventuality. The world knew what was happening in China and the present situation was expected. The lock-down did not come all of a sudden and thus Amul was much prepared for it.

Amul one the biggest food product marketing outfit in the country, with a revenue of Rs 52,000 core had endured its position over the years. Amul amid stiff competition and the pandemic has always consolidated its position. Amul has not just steered itself amid the Covid-19 pandemic and lock-down, it also made sure it thinks differently from the private companies.

As an organization, the lock-down was 100 percent unprecedented for Amul. Even at the time of curfew in Ahmedabad which lasted for months, Amul worked without any disruption. But this time the intensity and quantum were a bit different. Back then the lock-down was only in parts of Ahmedabad and Amul had no technology, internet, or phone.

Amul started its preparation 10 days before the lock-down. Amul is in a critical business as milk and its products are an essential part of men’s day to day life also it is a dependable source of livelihood for lakhs of people mostly poor women and marginal farmers. Amul at the head office split the team into two sets looking at different aspects of their operations like precautions, sanitization, social distancing, warehousing, and invoicing.

They also figured out to have a robust IT backbone to carry out their operations. Amul also stocked up products in their 77 warehouses.
Amul MD RS Sodhi says, ” Like everyone else even I got panicked and then the first thing I did was to communicate with the consumer and the farmer”. Apart from reassuring to all its stakeholders, Amul also announced a hike in the incentives for everyone up to 40-50 percent of salaries. It also increased their margin distribution and doubled the communication with the consumers through improved advertising.

In Mumbai with 84 plants, when Amul’s four-five plants were affected, the remaining plants worked overnight. For Amul, their product selling has increased and hasn’t gone down. Though the situation was challenging, Amul made sure they faced no disruptions in production, supply and transportation. Amul got around 40-50 lakh litres milk during this lock-down period. So Amul has always moved with a simple philosophy, their mission is to have minimum EBIDTA and to keep all their stakeholders pleased and happy. Amul believes in giving more to earn more.

Thus Amul has always worked hard to establish this equilibrium and to earn their customer’s faith in the brand.

Passionate in Marketing - October 26, 2021
0
Should our aspirations be curbed simply due to our background? This is the pertinent question raised in SonyLIV’s latest release ‘Yennanga Sir...

Funding options besides health insurance in case of health crisis