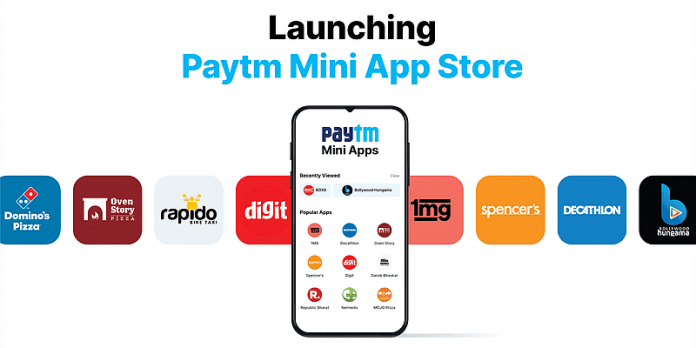 Paytm on Monday stated the launch of its Android Mini app store, the app was created to support Indian developers to allow distribution of products. This app is a fully custom-built mobile website that gives the user the feeling of using an app without downloading it, which reduces the consumption of data and saves phone memory.

The app is developed a few weeks after, Paytm app got blocked from Google play store, for violating gambling and online casino policies. Paytm is allowing listing and distribution of these mini-apps within its app without any charges and developers are given their choice to choose payment through Paytm wallet, UPI, Paytm payments bank, and cards.

Developers protested against Google for planning to increase a 30% commission on in-app purchases. Paytm claims that this app will be beneficial to small developers and firms to set up low-cost, which is fast to build mini-apps that can be created using HTML and Javascript technologies. The company does not charge on Paytm wallet, UPI, Paytm payment bank account, and charges 2% for other instruments.

Paytm mini app store allows the user to search, browse, and play without downloading or installing. over 300 service providers such as Decathalon, Ola, Park+, Domino’s pizza, Freshmenu, No broker had joined this initiative. It offers a dashboard to developers for analytics, payment collection, and marketing techniques to get involved with users, it is running in beta and more than 12 million views were recorded in September.

The company stated that this local Indian app store targets to drive the Aatmanirbhar Bharat Mission while keeping the digital consumer spends within India.

Founder and CEO of Paytm, Vijay Shekhar Sharma, stated that they have created an app that gives a chance for every Indian app developer, it is said to be useful to developers to creative inventive services.

The users can have access to uninterrupted experience, where the user needs not download the app and waste their time by downloading but can view the app, which acts similar to an app that is downloaded and the app also allows the users to choose their payment option according to their desire.

Kailasnath HI - January 19, 2021
0
Early work on iPhone has begun by Apple Inc with a foldable screen. It could be considered a great rival for Samsung...