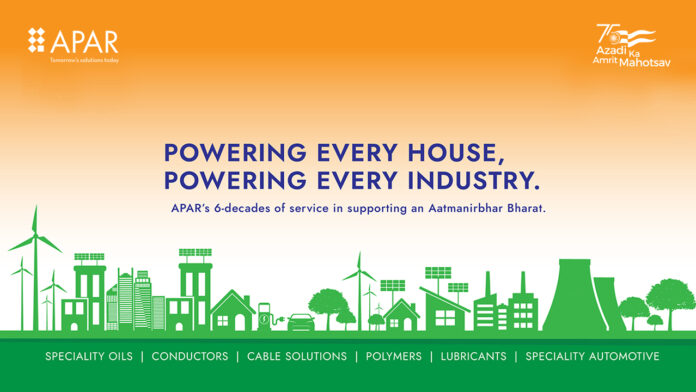 Powering every house and every industry

Mumbai, 16th August 2022: As India commemorates 75 years of Independence with a grand celebration of ‘Azadi Ka Amrit Mahotsav’, APAR Industries Limited is proud to be a significant contributor and building block to the power sector of India. From the very first day of inception, the founder and company have firmly stood by the vision of an Aatmanirbhar Bharat (self-reliant India) and making India as an export powerhouse.

Commenting on the occasion Mr. Chaitanya N Desai, Managing Director of APAR Industries said, “Since 1958 APAR has been relentlessly contributing to the power sector by manufacturing and supplying quality conductors to enhance transmission and distribution of electricity in India. APAR started with humble beginnings 11 years after independence by Shri Dharmsinh Dadubhai Desai a visionary entrepreneur, freedom fighter, and servant of the nation. He envisioned significant growth in the power sector for the betterment of the nation and thus embarked on the journey to build APAR Industries.”

Shri Dharmsinh’s belief of contributing to the country has been deep-rooted and was passed on to the 2nd generation to Dr. Narendra Desai who joined APAR in 1964. He ventured into the manufacturing of transformer oil business which is one of the most critical components in a power generation, transmission and distribution system by supporting a transformer function at an optimum condition. He served the country and APAR until his last breath.

Today with the reins of the company in the hands of the 3rd  generation, they have further diversified and expanded the business, serving different verticals which include speciality cables, lubricants, speciality automotive and polymers. With the new entrance of the 4th generation, the Millennials are taking the company to international markets with the support of digital and strategic initiatives.

Marked by significant milestones and reforms throughout the journey of 64 years, the company has brought India numerous recognitions on a global platform in each and every vertical the company is present in.

APAR is recognised for developing, innovating and manufacturing many first-in-India products and technologies, which were predominantly imported.  In the search of creating an Aatmanirbhar Bharat, the company has grown to become the world’s largest aluminium and alloy conductor manufacturer, the 3rd largest transformer oil manufacturer and offers the largest range of speciality & renewable cables. Consistent growth in these diversified verticals has propelled the company to become a billion-dollar conglomerate with a strong presence in over 140 countries.