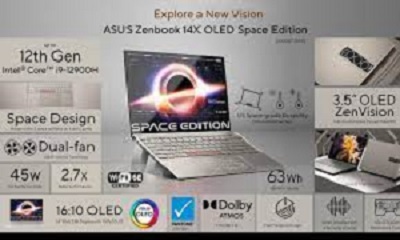 ASUS India, a Taiwanese IT giant, has launched a new advertising campaign called #MySPACEstory to mark 25 years of SPACE Journey innovation. The commercial tells the experiences of several artists’ childhoods and how they were inspired by SPACE to achieve their goals!

ASUS was one of the first OEMs to launch their first laptop (P6300) into space 25 years ago. After more than two decades, ASUS is recognizing its incredible achievement with this campaign, which is inspired by SPACE to help individuals become the greatest version of themselves.

Their voyage to space offers profound insights and a combination of intangible feelings, excitement, and adoration was told by Arnold Su, Business Head, Consumer and Gaming PC, System Business Group, ASUS India, on the occasion of launching the campaign. When they first began out, they envisioned themselves as the PC industry‘s technology and innovation pioneers. They were among the first to send a laptop to space for a critical mission.

Further, he added that after many years and a great deal of innovation, they now reveal to customers what a modern laptop might look and feel like. This campaign was created to involve their consumers in this inventive revolution and celebration by inviting them to share their SPACE tales of inspiration and motivation in conjunction with the launch of their current consumer notebook assortment.

Space is a fantastic “place of the game” for scientists, providing an infinite amount of knowledge and learning. Curiosity has had a tremendous impact on the evolution of the human species.

Through this campaign, ASUS is encouraging people to share their space stories and how they were motivated to beat yesterday. In collaboration with key influencers, like LaxmiPilot, the pilot who flew trapped Indians home during the epidemic, content creators Nicole Concessao and Ganesh Vanare, and prominent tech media curator Beebom.

Nicole Concessao, speaking on the campaign, stated, that he never imagined that his studio SPACE would have such an influence on his life. Dance has always been a method for him to fully express himself, and the Zenbook Space Edition is ASUS’s way of demonstrating their technological capabilities in consumer computers.

“SPACE,” Ganesh Vanare continued that it means anything and everything that tells a narrative to him. Taking pictures in the middle of mayhem has always given him an adrenaline boost.

People will be encouraged to relive a period in their youth when they peered out into diverse SPACES and aspired to achieve their goals as part of ASUS’s latest campaign. SPACE encouraged ASUS 25 years ago to take chances and experiment, resulting in the greatest laptop for customers, loaded with cutting-edge technology and the newest innovations, which has endured for more than two decades. ASUS offers an amazing lineup of Zenbook Space Edition, Zenbook 14, and VivoBook S for 2022, which will be revealed on May 12th.

Author - May 19, 2022
0
Business operations, consumer behaviour, and marketing strategies have undergone plenty of changes within the pandemic period. Goals, visions, and aspirations have had...