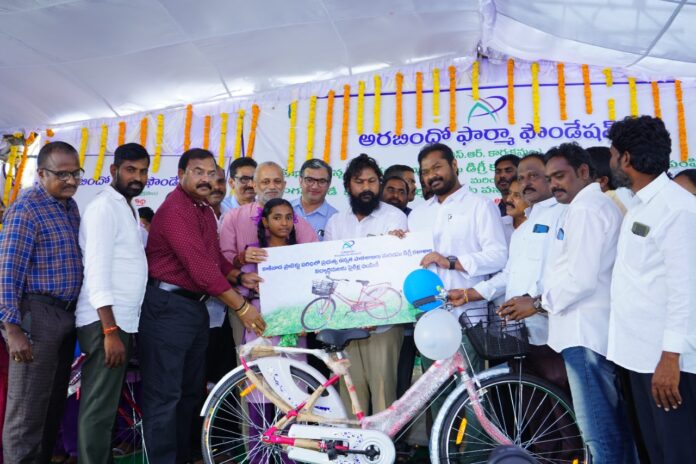 –  Minister flags off distribution of 750 Bicycles worth Rs. 38 lakhs to Girl Students in Kakinada SEZ vicinity.

–  400 bicycles handed over to students from Thondangi Mandal on Tuesday.

Speaking on the occasion, Mr. Dadishetty Raja said, “Aurobindo’s social initiatives in Education sector will soon make Thondangi Mandal number one in school infrastructure sector in the state. Their other activities in the region will result in beginning of a golden era for the people residing in the area”. He congratulated the directors of Aurobindo Pharma Foundation, Mr. K. Nithyananda Reddy and Mr. P. Sarath Chandra Reddy for their exemplary contribution to local communities through their Foundation services. He requested the Aurobindo management to provide the employment opportunities to local youth. Mr Raja extended his full cooperation for setting up Industries in this area.

Mr Koyya Murali Krishna, Chairman, Tuni Market Committee said,” any change for good may have some hardships initially, but ultimately people will enjoy the benefits. He supported setting up Industries in the region and as per the policy of the Govt. of Andhra Pradesh, locals will have the reservations up to 60% in employment, hence our people will be benefited with the upcoming Industries in the region”.

While speaking on the occasion, Mr Ramakrishna, senior Vice President Aurobindo group said, “lot of industries would come up in this region with the initiative of Aurobindo. This will give an opportunity to the local youth to get the suitable employment in their own area”.