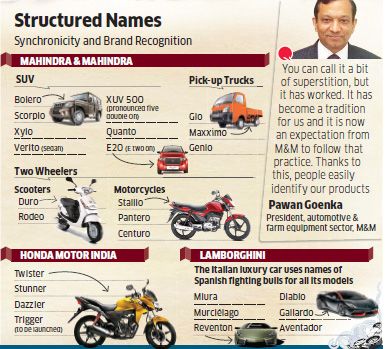 May it be SUVs or XUV 500, the Mahindra and Mahindra vehicle names’ read Bolero, Xylo, Scorpio, Rodeo, Duro etc., The Company started this naming pattern after the success of its vehicles Bolero and Scorpio and decided to stick with it.  Some call it superstition, but the statistics indicate that it has worked for the company. This naming trend has slowly crept into the company’s tradition and it has become a practice. There is also a positive side to it that is people readily identify the Mahindra and Mahindra products. The company recently revealed e2O its first electric car thus continuing with the tradition of ending the name of the vehicle with word ‘o’.

When names ending with ‘O’ have become a practice for Mahindra and Mahindra, the names of models of Honda Motorcycle and Scooters India end with ‘er’. The Company’s vehicles have seven-letter names like Dazzler, Stunner, Twister etc., The company is also about to launch a 150 cc motorcycle called Trigger as well.

What is the advantage of naming the models with such names? The nomenclature system helps these companies cut short on their ad-spends and the synchronicity in the naming enable people to remember the brand. It is not that only ‘er’ ending models have clicked for Honda, the non-ER ending vehicles have also brought Honda good revenues and to name some in the line are the vehicles Activa, Unicorn, Shine, etc.

The trend of synchronous naming is not something new and doesn’t stop with the automobile industry. There are leading film producers in Bollywood who follow a similar naming pattern for their films. The naming harmony of the automobile majors carries in its kitty two significant advantages of creating a brand image and reducing the ad spend. What more does a company look for when it steps to market its brand? It’s very difficult to decode the consumer psyche and to make the product click and till then it is going to be trial and error or more often continue with the same trend.