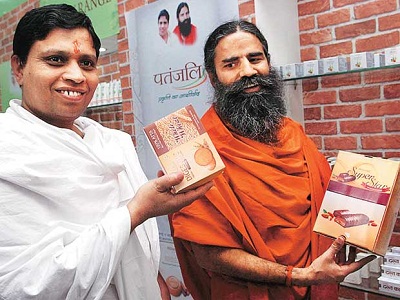 Patanjali Ayurved that is co-founded by Baba Ramdev, the televangelist is aiming to achieve a Rs 10,000 crore revenue in the current fiscal year ending March 2017. In the previous fiscal year, the sales of the brand grew by 150 percent.

If the revenue target is achieved, Patanjali Ayurved will be ahead of the MNCs such as Colgate-Palmolive, Proter & Gamble, and Nestle in India.

Patanjali Ayurved, the Delhi headquartered brand has four business segments such as food and beverages, cosmetics and heath, home care and health drinks. This firm would also venture into animal feed and khadi products this year. The brand was founded in 2007 and it has grown over ten times in terms of revenue in just five years. This is an unprecedented achievement in the fast moving consumer goods industry in India.

Baba Ramdev stated that this is only the beginning. He stated that competitors like Colgate-Palmolive, Hindustan Unilever, and Nestle will be left clueless due to the growth of Patanjali Ayurved. Dant Kanti toothpaste from the company has posted sales of Rs 450 crore in the previous fiscal and the shampoo Kesh Kanti and hair oil have posted sales of Rs 350 crore in less than one year’s time, he noted. The company has plans to increase its overall distribution network this fiscal.

Patanjali Ayurved has 10,000 stores, 100 megamarts, and 4,000 distributors so far. Last year, the company tied up with the retail chains including Reliance Retail and Future Group. To keep up with the rising demand, the FMCG company has established at least four new manufacturing facilities this year investing Rs 1,000 crore.

He stated that they will establish six processing units in different parts of India. Besides this, they will invest Rs 150 crore in the R&D process. The units will be opened in Maharashtra, Madhya Pradesh, and Uttar Pradesh. Balkrishna, the disciple of Ramdev and co-founder of the firm stated that they are looking forward at the e-commerce strategy and they will focus on strengthening their exports to a minimum of 10 to 12 countries.