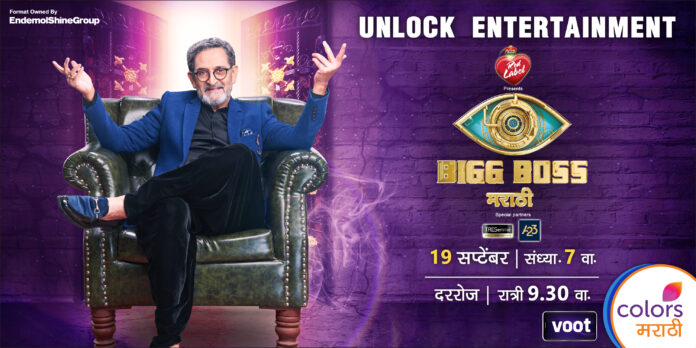 ~ Brooke Bond Red Label onboard as the Presenting Sponsor, while TRESemme, HAIER & A23 have joined as Special Partners

Mumbai; 15th September 2021: Your prime time just got the mega boost it needed with COLORS Marathi all set to sear your television screens. Revolutionizing Marathi Television, Brooke Bond Red Label presents ‘Bigg Boss Marathi Season 3’ will see high voltage drama unfold with versatile actor-director-producer par excellence, Mahesh Manjrekar enthralling viewers as the host while keeping the 15 celebrities in check. The celebrated show will have a four-hour grand launch at 7.00 pm on 19th September with an intriguing mix of 15 celebrity housemates making the season even more exciting! The show will be subsequently aired Monday to Sunday at 9:30 pm only on COLORS Marathi. Produced by Endemol Shine India, Brooke Bond Red Label presents ‘Bigg Boss Season 3’ for its latest season has onboard Brooke Bond Red Label as presenting sponsor and TRESemme, A23 & HAIER as the Special Partners.

Speaking about the launch of the third season, Ravish Kumar, Business Head – Regional Entertainment (Kannada and Marathi) said, “Bigg Boss itself is a phenomenon and staying true to our promise of providing wholesome family entertainment, the new season of Bigg Boss promises to have many surprises for its audiences. The last two seasons have performed exceptionally well, and we only wish to grow from here. Bigg Boss Marathi proved to be one of the topmost viewed shows in the Marathi general entertainment space for both seasons, attracting not only television viewers but also a massive number of digital viewers on VOOT. Bigg Boss Marathi is the undisputed king in Marathi television that provides various opportunities for brands to reach out to their target audience as is evinced by the number of sponsors on board. “

Aniket Joshi, Business Head Colors Marathi, said “Bigg Boss Marathi is undoubtedly one of the more popular shows of Marathi television. Every season, we give a new meaning to unpredictability and make the content entertaining as well as cohesive to appeal to all. From a format perspective, we have tried to make this season different, innovative and made sure that we have the right kind of contestants and housemates. Audience will also get to see Marathi flavor be it in the tasks or routine.

Viraj Raje, Head of programming Colors Marathi, Said ““Since the pandemic, the world as one community, is facing a very challenging time. Experiencing lockdowns and unlocks, the audience today can relate to the determination and strength displayed by contestants to stay ‘locked-in’ inside the Bigg Boss Marathi house for 100 days. Unlocking the entertainment quotient, this season of Bigg Boss Marathi is all about showcasing the contestants’ determination in the face of challenges and living with a positive frame of mind.”

Further talking about this season’s theme, he added, “Our overall approach with Bigg Boss Marathi Season 3 is to celebrate the ‘Marathipan’ by displaying the various cultural nuances of Maharashtra. Be it the design elements inside the house, the tasks, and even naming Weekend ka Daav as Chavadi, we have tried to bring in the true essence to Maharashtra’s rich culture into the show.”

On the most waited third season of Bigg Boss Marathi the host, Mahesh Manjrekar said, “The past one and half year has been very difficult for all of us. We all have been through an emotional roller coaster ride. But with the arrival of Maharashtra’s most favorite show, Bigg Boss Marathi, we wish to make audience forget their pain and sadness. As we get used to the new normal, I’m glad to be back with Bigg Boss and entertain every one of you.”

On creating another adaptation of the successful franchisee, Abhishek Rege – CEO, Endemol Shine India said, ““After receiving an overwhelming response from the viewers for the last two seasons we at Endemol Shine India have gone the extra mile to ensure that the housemates are kept on their toes throughout this new season. Each episode will captivate the audience with fresh content, surprises, unexpected twists and turns so stay tuned! “Said Abhishek Rege CEO Endemol Shine India”.

The third season will have 15 different celebrities quarantined in the Bigg Boss house for 100 days with the voice of Bigg Boss as the only source of guidance in their lives during their stay at the house. This year we are taking it a step even further by giving Bigg Boss Marathi audiences 24*7 LIVE access of the house and introducing weekly tasks chosen by Voot users. Audiences could not just vote for their fav contestants but could ask them questions in the house via Tumcha Prashne, send them messages via Chugli booth and shared with other fans their thoughts on what’s going on in the house via Video Vihaar.  With 60+ cameras watching every move of the contestants, every second in that massive house, each week at least one participant will be evicted based on nominations from fellow housemates and through public votes.

Block your spot on the couch in front of the television sets starting 19th September at 7.00 pm only on COLORS Marathi & VOOT