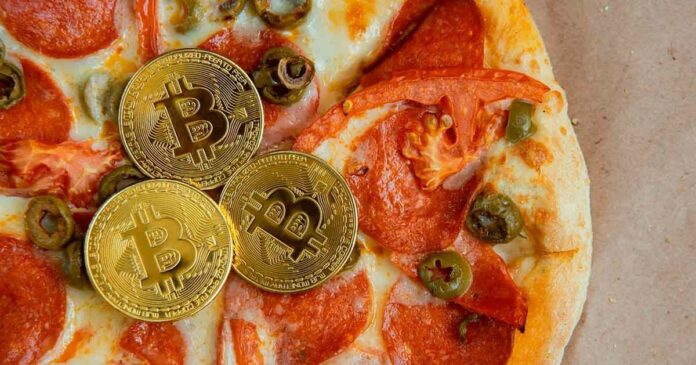 On May 22, 2021, the cryptocurrency community commemorated Bitcoin Pizza Day for the eleventh time.

Pizza, as one of the world’s most popular dishes, has gained prominence in the cryptocurrency world as well. It has achieved such wide acclaim that the bitcoin market commemorates Bitcoin Pizza Day every year on May 22. This year’s bitcoin holiday celebrated the 11th anniversary of the first Bitcoin transaction, which took place in 2010 using Papa John’s pizzas. Let’s recap how Bitcoin Pizza Day came to be and the current pricing of those pizzas.

Jeremy Sturdivant was an ordinary 19-year-old California student when he got an offer on the Bitcointalk discussion site to order two large Papa John’s pizzas for a 28-year-old Florida resident named Laszlo Hanyecz in exchange for 10,000 Bitcoins.

Laszlo, a Bitcoin pioneer from Florida, requested two large pizzas with standard toppings such as onions, peppers, sausage, mushrooms, tomatoes, and pepperoni, without any strange fish toppings. He also explained why he ordered two huge pizzas: he prefers to snack on the leftovers the next day.

Jeremy calculated that he would receive $41 for those 10,000 Bitcoins, which would be enough to cover his girlfriend’s trip expenses. As a result, he agreed to the request and sent two enormous Papa John’s pizzas—one cheese and the other supreme. It was the world’s first virtual cryptocurrency transaction, and the day proved to be momentous.

In 2021, how much are these two Bitcoin Pizzas worth?

Those two iconic Papa John’s pizzas have progressively become the most costly pizzas on the planet. The value of 10,000 Bitcoins for $41 at the time of the transaction in 2010 was initially $10,000 Bitcoins for $41. In the present cryptocurrency environment, the price has reached $63,000, equating to $630 million in two pizzas.

Jeremy could have been a millionaire in 2021, even though the bitcoin market is still volatile. In 2018, Laszlo Hanyecz became the first individual to buy a pizza using the Lightning Network for only 0.00649 Bitcoins.

This famous cryptocurrency holiday has prompted Anthony Pompliano, a crypto-influencer, to establish Bitcoin Pizza, a new project to help support Bitcoin research and development. He announced that his brand would be available in ten cities, with the first batch of pizzas gets delivered on Bitcoin Pizza Day in 2021, which will take place from May 22 to May 29.

Passionate in Marketing - December 3, 2021
0
"Chhorii", a Hindi horror film, is one of the latest OTT assets released to a roaring audience reception on Amazon Prime Video...