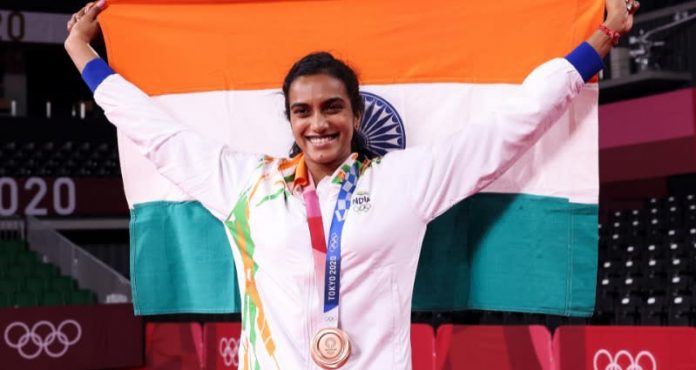 PV Sindhu wants to take legal action against brands using her name and image after she has won the Bronze during the ongoing Tokyo 2021 Olympics.

It became an opportunity for the brands to do marketing that had received success during the Tokyo Olympics. Companies or advertisers gain visibility and traction with celebrities.

P V Sindhu is the two-time Olympic medallist, where the sports marketing firms representing her name and image in some posts without her permission. Recently based on this, the marketing ethics, even if it is party mood to celebrate the athletes moment of success.

Based on the media report, Baseline Venture representing Sindhu by requesting to take legal action against the brands, and the companies are exploiting her image and name without her permission.

The present existing sponsors are shocked that the brands are using her image to congratulate her. In the past, connecting to some of the brands for sponsorship has not replied back and now they are using her name and image for the moment marketing endeavor.

On both sides the advertising professionals advise moderation and suggest the brands not to exploit the celebrity’s achievements for any type of the commercial ends and latter should not view about the advertiser’s suspicion.  There are some particular rules and guidelines where brands should not breach.

This is not for the first time, three years ago, Baseline Ventures, on behalf of Prithvi Shaw had also pleaded swiggy and Freecharge when they put the post on the social media that played on cricketer’s maiden century.

Even some of the brands have spoken with the company and taken down the posts after realizing the mistake. Present the legal team is speaking to the other brands also. Some of the brands are Aditya Birla Group, Apollo Hospitals, and others.

Amul conjuring popular ads with eye-catching commentaries. Celebrities tend to be easy on Amul because its distinct stamp has been seen as an enhancement of one of its brand’s values.

Amul’s congratulatory campaigns are not breaking the rules because Amul is a sponsor of the Indian Team in Tokyo. Tokyo Olympics has issued regulations and Brand protection guidelines based on intellectual property rights.

Based on the GroupM report, PV Sindhu is the highest-paid athlete in the country. Also, she has done many conversations on social media.