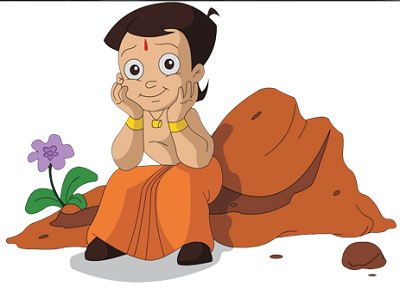 In the minds of children in the country, there will be a fight between Iron Man, Doraemon, and Superman maybe. But, facing them is a nine year old with never-ending appetite for laddoos. Well, the talk is about Chhota Bheem, the young boy clad in a dhoti and accompanied by his band of sidekicks.

The country’s largest entertainment brand that started as a TV show now exists in a wide variety of products. However, it is far from Hello Kitty that is worth over $7 billion and present on many stuff such as school bags and maternity wards.

Chhota Bheem trounced the Indian and international global contenders to win over kids in the country. Rajiv Chilaka, the CEO of Green Gold stated that he values the company to be estimated at Rs 300 crore. The industry estimates point out that it could have achieved more than double. The character was born of his fascination with Bhima of Mahabharatha and his Disney animated series such as Amar Chitra Katha, Tintinand superhero comics.

The success of Chhota Bheem came from its progress of being launched as a comics and TV show in 2009 followed by toys in the year 2010. The very first brand to launch something with Chhota Bheem is Notty drink. It attracted the attention of HUL that started promotional packs for the instantly noodles brand Knorr Soupy Noodles in 2012.

Since the past few years, the brand is ubiquitous and it covers almost every product. Bheem has replicated Disney. It exists in product categories such as biscuits with Parle G and fans from Usha.

However, there are critiques that also come along the way of the character. They state that kids are hooked to the show and don’t pay heed to stop watching it. In fact, kids don’t go outdoors and get some physical activity due to the show.

The show is claimed to be too violent and leaves an impression among kids that all issues can be resolved by fighting. The laddoos concept was inspired from Popeye show where the sailor eats spinach. This inspires the kids to choose the fat and sugary diet instead of choosing healthy dishes.