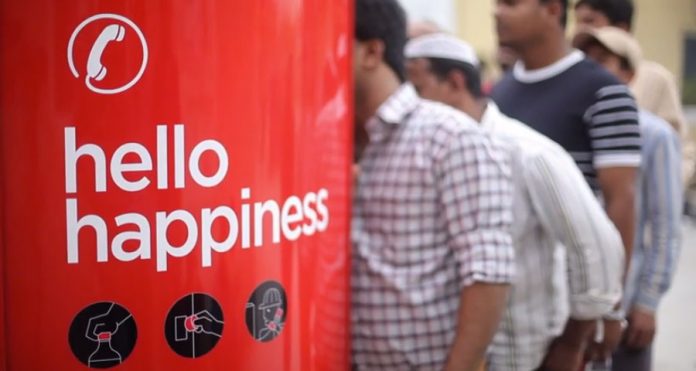 May 23, 2014: Coca- Cola has launched a new Hello Happiness campaign after it installed five special phone booths in Dubai labor camps. The specialty of these phone booths which were installed in March is that they accept Coca-Cola bottle caps instead of coins. A migrant worker could make a three minute international call with a cap from a bottle of coke. A bottle of Coke costs about fifty four cents. The campaign which ends with a question “So what if every Coke came with a few extra minutes of happiness?” has gone viral on social media platforms and has been a focus of debate.

The new video of Coca Cola “Hello Happiness” shows the hardships of labor camp and shows the migrants telling us how they love and miss their families. The migrants say in this video that a phone call costs a dollar per minute and it is difficult to make phone calls daily since a typical worker just makes six dollars per day. The ad shows workers who appear for the first time in a video talking about their experience of making calls using these caps. Coca-Cola dismantled the booths in April after placing it for one month and more than forty thousand people had made calls using the machines during that time.

After the video started going viral there has been mixed reactions on it in the social media circle. Some of them commented positively to the video and one of them even commented that “Almost made me cry”. There are some others who reacted very negatively to the video and wanted to know if Coca-Cola is shedding light on the lives of migrant workers in labor camps or adding to the exploitation.  Wendy Clark, a senior vice-president at Coca-Cola commented about this criticism and said she identified a broader challenge for Coca-Cola. She was quoted as saying “If I think about the over-all context of our campaign and our film, it seeks to include everyone. That’s a tall remit with seven billion people in the world.” She added, “If we want to be the world’s most inclusive brand and say we are, we’ve got to speak to those audiences.”