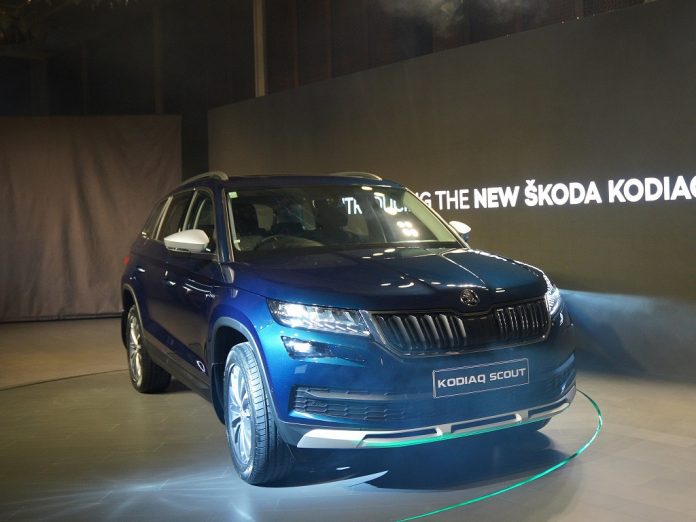 Due to the unexpected pandemic situation that flooded across the country, Skoda Kodiaq TSI Petrol BS6 which was about to launch made a delay. The model was planned to go into the Indian market later this year of the five new and updated model that was to be launched in 2020. But taking under the analysis of the current analysis, the company has postponed its launch during the year 2021.

As per the emission norms of BS6, Skoda has stopped its diesel lineup in India and made them include models like Kodiaq. This model is a full-size SUV with a petrol powertrain which was about to be launched later this year. This would have been a big threat to competitors.

As stated by the director of Skoda Auto India, Zac Hollis, the launch of the petrol variant was pushed to 2021. They call this Skoda Kodiaq TSI Petrol to be the antagonist to Ford Endeavour, Volkswagen Tiguan Allspace, and Toyota Fortuner. And the launch is estimated to pull off the market the other brand cars. Since it is a petrol car, it will have a great welcoming in India and also the spacious feature of the car makes it even more exciting for the customers.

Beneath the lid of the upcoming Skoda Kodiaq TSI Petrol, it will be a 2.0-liter engine that can produce 187bhp and 320Nm of torque. And also the engine will be paired to a seven-speed DSG transmission with a system of 4×4.

There is a huge expectation for this particular model. It attracts its customers by its variant features like three-zone climate control electrically adjustable front seats with memory function, eight-inch touchscreen infotainment system, virtual cockpit, panoramic sunroof, and all LED lighting. Listed above are a few features of the vehicle and other than this there are lots more safety pieces of equipment.

Reports state that the delay is due to the supply chain that has ultimately created an impact on the production of the automobile. Always, the wait creates, even more, higher expectations. Thus the firm has made it clear to take a deeper analysis of the output product and has looked into a detailed perfection of the same.

Talking about the price of this automobile, it is expected that Skoda Kodiaq TSI to command between Rs.30-35 lakhs. And also the model has some advanced features in it that would increase the comfort level of the customers.

Passionate In Marketing - September 16, 2020
0
Amul has been the first Indian dairy firm to find its place in the top 20 global list published by Rabobank, a...