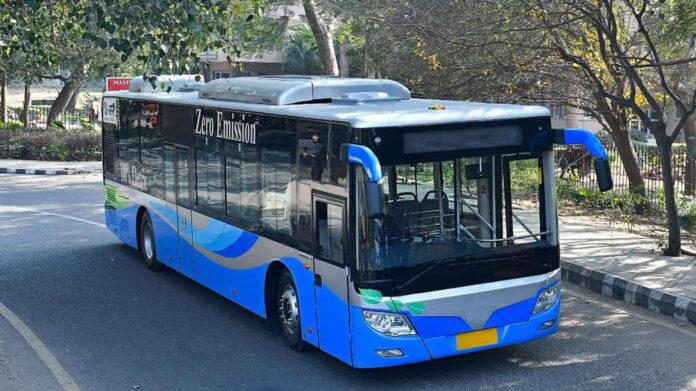 In an effort to tackle air pollution, India’s national capital, Delhi will be rolling out its DTC electric bus.

According to CM Kejriwal, it is a vital strategy to reduce pollution; around 300 e-buses will be introduced by April this year, with a goal of 2000.

The electric buses will go a minimum distance of 120 km, and recharge stations are being set up, he added.

The e-bus routes have been finalized by the Delhi government, where they will be running a 27 km long route in the city.

JBM Auto Limited is the manufacturer of these electric buses, and the bus will have a 1.5 charging time.

The DTC electric bus prototype had arrived at the IP depot, the prototype bus will travel along Route E44, which is 27km long (Pragati Maidan to IP Depot via ITO, Safdarjung, Ashram).

By February of this year, 50 more e-buses will be available, according to the transport minister. Gahlot also added that the e-buses would be added in groups of about 50 each month.

There are a total of 2,300 e-buses in the works, the DTC will procure 1,300 of them, while the remaining 1,000 will operate under the cluster arrangement.

As per the pre-decided route, the e-bus will run from ITO to Pragati Maidan.

The prototype bus will assist the Delhi government in determining how long the bus’s battery would last and other technical issues, the additional buses will be added to the fleet only after that.

The Delhi government will install charging stations for these e-vehicles in bus depots in a phase-wise manner.

In addition, the DTC will build four “hybrid” bus depots that will combine electric and CNG buses, these will be the Subash Place, Rajghat, Hasanpur, and Bawana depots.

The Delhi government had decided to induct e-buses in 2018, they will be procuring e-buses in the future.