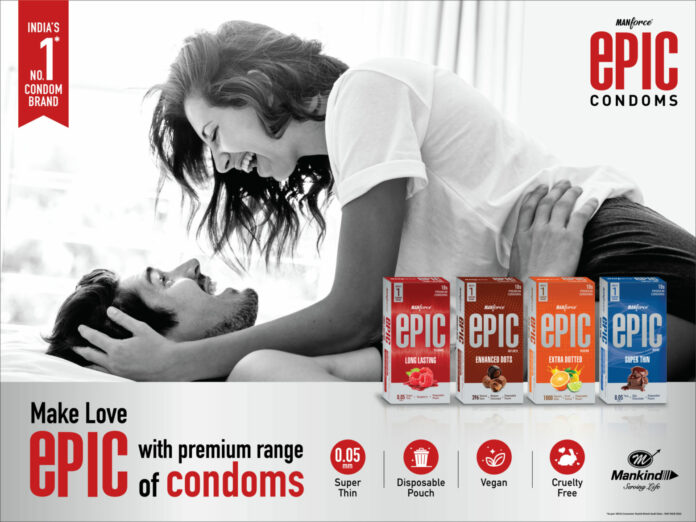 Epic Condoms is a new entrant in the market, and this campaign is designed to introduce and make consumers aware of the new brand from India’s leading condom brand i.e. Manforce Condoms, to the target audience. Epic Condoms have been launched across pan-India, and the USP of the product is that it comes as  vegan,& cruelty-free, which are thin, and have disposable pouch.

The campaign specifically focused on the Delhi NCR region. The entire campaign is a 3-month long activation. For the same, it took a 360-degree approach to enhance the product visibility across multiple channels like on-ground, digital and radio to instil better recall value amongst the audience.. To make people aware of the new product, hoardings have been displayed at all the prime spots across Delhi NCR –  regions along with Delhi Metro ad spaces. The primary objective of the campaign is to increase affinity in the minds of the consumers and have a better recall.

The brand adopted a geo-targeted approach for social media promotions and collaborated with content platforms  to get as much attention towards the e-commerce website to amplify purchases substantially.

Speaking on the campaign, Joy Chatterjee, Associate Vice President- Sales & Marketing, Mankind Pharma, said, “We have launched a premium product in the market. Thus, an intensive campaign was required to make customers aware of the new offering. The thought behind having a 360-degree campaign is to increase its visibility in the market while highlighting its unique features to help the audience know about the offerings. The newly launched Epic condoms, curated to intensify the love-making session with long-lasting pleasurable moments, needed intensive campaign to match up to the premium market segment that it caters to.”