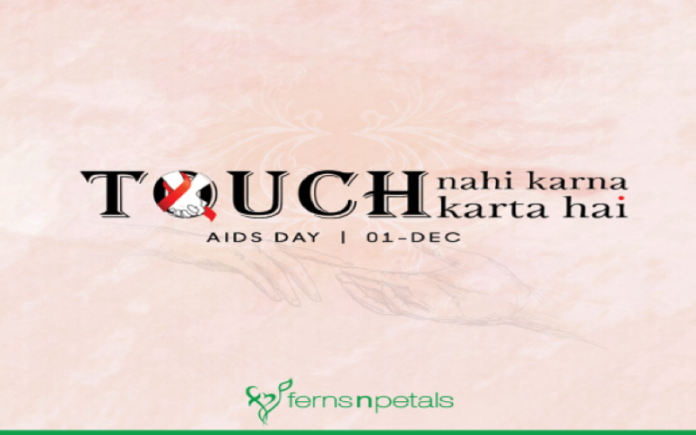 Ferns N Petals is a brand that connects people for emotional reasons with its gifted solutions. The latest product campaign Touch Nahi Karna Hai is a step towards ending HIV-based stigma.

Although HIV / AIDS has many effective and evidence-based preventive measures, people with HIV or AIDS are discriminated against in the community which is a major concern – HIV / AIDS is a contagious disease. The storyline ‘Touch Nahi Karna Touch Karta hai’ is a word that encourages people to look at their own ideas.

In this campaign, a team from Ferns N Petals reached out to the Desire Society, a voluntary non-profit organization registered under the Andhra Pradesh Societies Registration Act, 2001 with several programs in the field of HIV / AIDS, maintaining the goal of health promotion and well-being – children living with HIV / AIDS (CLHAs).

The team spent a lot of time with these HIV + children, from eating together to playing games, and traveled wholeheartedly to come back to do more such moments with these children. The intention was clear that touch would not spread the disease, but this misconception is a disorder in need of rest.

Ferns N Petals (FNP) is India’s largest flower and gift shop and is one of the largest flower shops in the world with a network of 320 stores in 120 cities. It was started by Vikaas Gutgutia in 1994. The first store opened in Delhi South extension and it took the company nine years before it finally broke down even in 2003.

Vikaas Gutgutia, Founder of Ferns N Petals, comments on the campaign, “From an early age, we were taught that HIV / AIDS is not a contagious disease and that there are differences between HIV and AIDS through school debates and so on and also the internet, on that subject.

Ironically, we do not want to ‘take advantage’ of our lives. We not only view HIV-positive victims as a threat to us but also treat them as a depressed community in a society where they are sent to different schools, given clothes to wear, and even treated as infectious diseases. ”.

AKA correspondent, Ferns N Petals Content Marketing Head, Komal Gupta, commented on the campaign on HIV / AIDS stigma, do we care enough to feel about what really needs to be changed? Instead of giving those HIV + Patients a nod, a tight loving hug, a handshake, or a little touch and let them know we are all equally good. ”