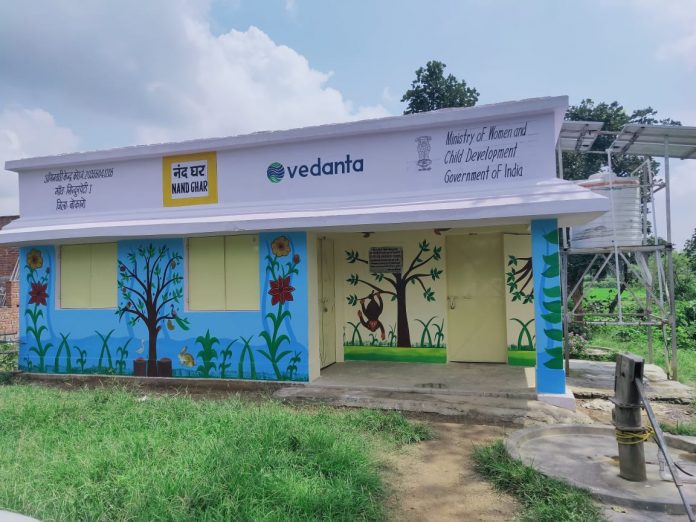 New Delhi, 10th March 2021: With the aim of promoting education, women empowerment, and eradicating child malnutrition, ESL Steel Limited, a Vedanta Group Company and a key national steel player, inaugurated 50 Nand Ghars at Sindurpeti, through a virtual launch by the honorable Chief Minister of Jharkhand Mr. Hemant Soren. Vedanta has targeted to make 150 Nand Ghars operational by the end of 2021. With the launch, Vedanta has moved closer to its vision of transforming the lives of 8.5 crore children and 2 crore women across 13.7 lakh aanganwadis. About 2100 such structures already exist across 10 states in India.

A dream CSR project for Vedanta, Nand Ghars are dedicated to benefit rural children and women in India by transforming traditional aanganwadis into state-of-the-art, fully equipped structures that create a conductive environment for early childhood development which includes elements critical to cognitive, social and emotional development. Run in collaboration with the Ministry of Women and Child Development (MoWCD), Nand Ghars are ensuring that rural India is not left behind in the country’s march towards progress.

They have some key features such as smart TVs for e-learning, 24×7 power backup, earthquake resistant structures, toilets, water purifiers, solar panels and kitchen gardens that make them model resource centres for the community. Besides providing nutritious meals to women and children, the Nand Ghars offer take-home rations to children and pregnant or lactating women. Primary healthcare services are also rendered here through mobile vans while the women are empowered through skilling, credit-linkage and enterprise development.

After the virtual inauguration, Jharkhand CM Mr. Hemant Soren said, “Vedanta is known for its developmental initiatives and has my support with them always. The Nand Ghars are a positive step in pushing India towards rapid progress. Children are our future and what better way to shaping their lives other than Nand Ghars, which are architecturally beautiful and inviting for the children. I congratulate Vedanta for rapidly achieving its target through Nand Ghars. They have the support of Jharkhand Government in all such initiatives targeted at the development of women and children.”

Other than the inauguration and the speech, CM Mr. Soren also interacted with the Nand Ghar staff as well as community members benefitted through Nand Ghar during the launch ceremeony and congratulated them for their hard work.

On the momentous occasion, Mr. Pankaj Malhan, CEO, ESL Steel Limited added, “On behalf of the Vedanta family, I thank our honorable CM Mr. Hemant Soren ji and the other dignitaries for taking out time for this launch. The project is aimed at developing the aaganwadis across the nation into state-of-the-art resource centres for the development of women and children. I am thrilled to announce that with this launch, we have successfully opened 50 Nand Ghars in Bokaro and aiming to develop at least a 100 more. Vedanta has been contributing towards the development of the state of Jharkhand, its people and India. I am forever grateful to the Jharkhand Government for supporting our initiatives time and again.”

The dignitaries present during the virtual launch included Vedanta CEO Sunil Duggal and Ritu Jhingon, CEO Nand Ghar who gave their valuable inputs and comments on the project. They reiterated ESL’s vision of Nand Ghars while thanking the CM of Jharkhand for virtually launching the Nand Ghars. Both of them expressed their excitement on the rapid success of the Nand Ghar project and the willingness to expand them to other states. The other important people present at the launch were Shri Rajesh Singh DC Bhokaro, Mamta Sahay CDPO Chas, Mr. Ashish Ranjan, Head Community Relations, ESL Steel Ltd and