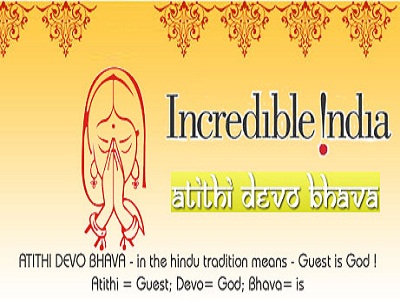 A multimedia campaign has been launched bringing the message Atithidevo bhava (Guest of God) under the Ministry of India Tourism’s Incredible India platform. This campaign has four films that are conceptualized by McCann Erickson and these feature Aamir Khan as the ambassador of Incredible India.

The theme of this campaign is related to the enhancing of the image of India in other countries showing the cleanliness, helpfulness and honesty of the citizens.

One of the four films shows a birthday party in Zurich where local lad Gajendra turns three. A flashback to Goa shows the story behind his Indian name. He helps a woman in labor on a railway platform with her husband and runs to their help by taking them to his car and driving them to a nearby hospital. He also climbs the closed gates of the hospital seeking help and the mother with her newborn in her arms looks at him saying, “Gajendra, meet Gajendra.” The film goes back to Zurich where the picture of Gajendra hangs in the garden for the celebrations.

The other film depicts the story of an honest guide named Mohan who is remembered by a British family even after returning home. He found and returned their lost valuables on the eve of their return flight and also refused to accept monetary compensation for his act. This has earned him a respect and a great place in their hearts. Their little boy sings his pahadi (mountain) song in Manchester.

The film featuring a businessman from Hong Kong inspired by a merchant in India shows the person visiting Munna’s stall in India on a holiday to find “Everything for 35 each”. Munna tells him that he wants only Rs 35 for a product when the tourist asks him if it is $35. Munna’s honesty inspires him even in Hong Kong where the tourist sells shirts tries to woo customers with the promise Munna’s Price.

The last one in the campaign features cleanliness as theme. Brijraj’s Bhature offers solace for a kid who is hungry and her mother from Canada on their Delhi tour. The lady’s concerns of cleanliness are brushed aside by the hygienic outlet. She gets impressed and comfortable to accept the bhatura recipe and try the same at home.