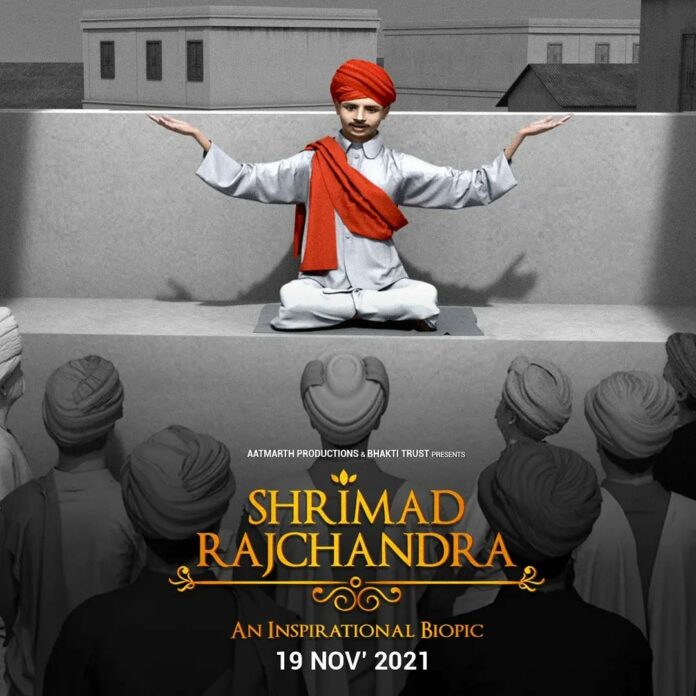 With advanced and immersive 3D visuals by Shreedhar Kakade, the finest international soul-touching music by Dharam Bhatt, charismatic style of narration by Amar Babaria and Subhav Kher, and melodious vocals by Prashant Muzumdar, the new animated Gujarati movie – Shrimad Rajchandra promises to win the hearts of all, young and old alike with a fan following across domestic and international markets.

8 years in the making, this film is now set to release in its finest avatar in cinemas on 19th November in 3 languages, Gujarati, Hindi and English. This unique piece of cinema captures more than 55 awe-inspiring incidences of this iconic personality’s life journey, from his humble beginnings as Laxminandan to his path-breaking spiritual influence as Shrimad Rajchandra over millions including Mahatma Gandhi and Jamsetji Tata.

The movie has been made with such precision that over 200 reiterations were done for Shrimadji’s model alone to get it right, from his birth to adulthood. This well-researched rich-in-content movie is brought to life by the magical touch of the music composer Dharam Bhatt.

Speaking about the movie, director Mr. Bhairav Kothari said; “The initial thought was to make just a simple audio visual that would influence the new generation and introduce a new perspective towards living life. But this thought metamorphosized into a large-scale magnum opus as we explored Shrimadji’s life story! It took us 250,000 man-hours, 4.5 million computing hours and over hundreds of challenges that were conquered. It is a very special project for me, and I believe that it’s not just a movie, it’s a gift of a lifetime!”

Adding to this, the Director of Animation Mr. Shreedhar Kakade said, “The biggest challenge for us was that we had to recreate character models and structures from old paintings and photograph. We managed to develop over 350 character models and 100 structures that look close to realty. This inspiring story is worth admiring and emulating and I am really looking forward to the audience experiencing the movie.”

You can pre-book a show for your loved ones through their ‘Good Karo, Show Book Karo’ campaign at: www.ShrimadRajchandraTheMovie.com