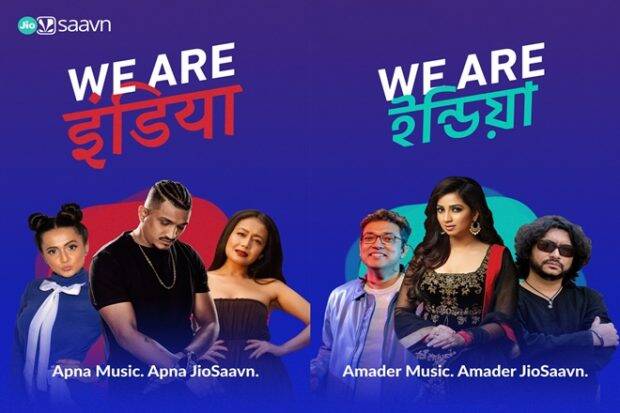 A well known and India’s largest music application, JioSaavn has taken up its digital campaign by celebrating the contemporary artists which have set the ground on fire. They call this channel campaign, ‘We are India’. This phrase has lots of hidden things inside it. But the actual reason behind this is celebrating all the contemporary artists who have set up their unique mark on the hearts of the listeners. This includes several Indian languages such as Malayalam, Marathi, Punjabi, Tamil, Telugu, Assamese, Bengali, Bhojpuri, English, Haryanvi, Hindi and Kannada.

The streaming is done on various online platforms such as Youtube, Instagram, and also on off-platform digital ads. The campaign has its reach among several music lovers throughout India.

The users who subscribe to various online music applications, wish to get the best out of it. The spending should worth the content, that is the logic behind the customer’s mindset. Every penny they spend on the subscription should worth it. That is the ultimate reason behind the update and bringing up campaigns like this.

The rewards also go into the hands of the music artist. That is why the listeners become more specific about the music choice they make. Music is one great tool that makes a shift in the mood, solves the problem, and helps to make a clear decision too.

Back to the JioSaavn’s campaign, throughout August, the campaign will feature something similar to a mini-documentary which features musically journey of various artists via Youtube.

The documentary contains artists from all parts of the nation such as Lifafa (Hindi), GV Prakash (Tamil), Harshdeep Kaur (Punjabi), Job Kurian (Malayalam), Taba Chake (Nyishi), and  Siri (Kannada). And also there are the icons of the industry they represent. The artists mentioned above are total legends and have their separate fan base.

Akhil S Kumar - February 27, 2021
0
PUBG Mobile 2 release is expected to occur as early as next week as from now, new report has claimed. This will...