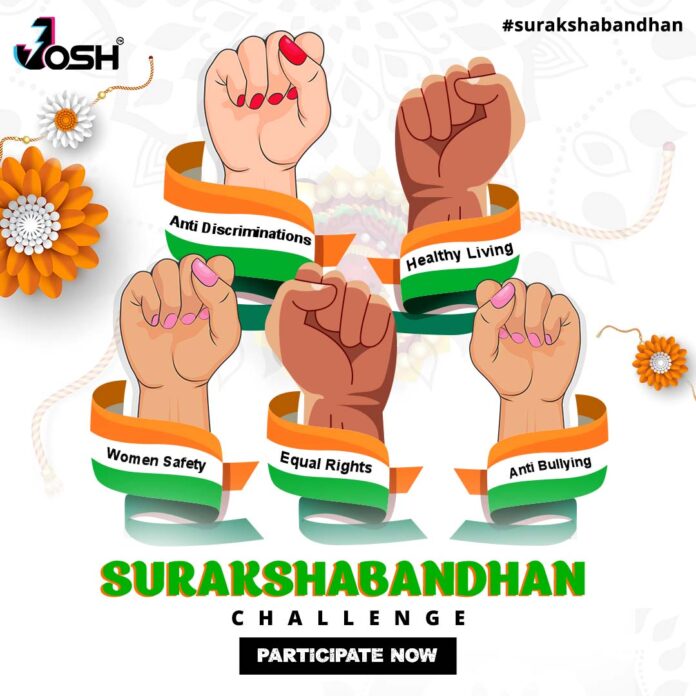 India, 11th August 2022: Josh, India’s fastest growing and most engaged short-video app, has launched #SurakshaBandhan campaign on the joint occasion of Raksha Bandhan and Independence Day. The campaign aims to spread awareness on social injustices by encouraging users to pledge solidarity for a host of social causes and protect themselves and others in a ‘raksha-bandhan’ sutra.

Josh has constantly strived to leverage its platform to lead meaningful conversations and raise awareness on important social issues through the power of short-video content. The #SurakshaBandhan campaign is yet another step towards mobilising creator voices and bringing positive impact in the society.

The campaign, running from 7th to 16th August, will enable users to create compelling content using special #SurakshaBandhan filters. Celebrating the spirit of the auspicious Raksha Bandhan and the 75th Independence Day, users can pledge their support to protect fellow Indians from social injustices such as inequality, discrimination, corruption, and crime against women. Winners of the campaign will be awarded a chance to attend the momentous Independence Day parade at Wagah border along with their families. In a symbolic gesture to honour the guardians of the country, the winners will also tie rakhis to our brave Indian soldiers thereby denoting the nation’s gratitude towards them.

Stakeholders from the police, medical fraternity, and bureaucrats have joined the campaign by sharing stories of people who have been affected by various social injustices.

Speaking on the campaign, Head of Creator and Content Ecosystem, Sunder Venketraman said, “At Josh, we’ve always worked towards engaging our user base to elevate socially relevant conversations. #SurakshaBandhan is doubly special for us as we commemorate two significant celebrations in the country – Raksha Bandhan and Independence Day. Through this campaign, we aim to create a dialogue on fighting social injustices and encourage users to pledge their allegiance to the cause.”

Passionate in Marketing - September 26, 2022
0
All campaigns and initiatives were carried out within a strict budget, with minimal production costs and a definite emphasis on original, and...